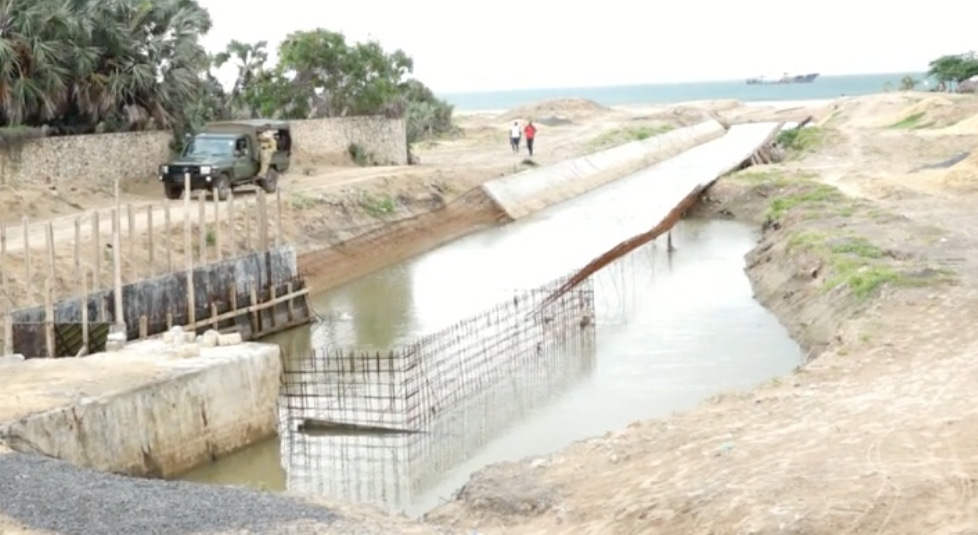 A delay in finishing the multi-million drainage project within Malindi town has now angered the business community.
Both the business people and residents are protesting at the delay for the project being undertaken by Municipality board.

The Drainage project is being funded by the World Bank through the county government of Kilifi. It started on May 17, 2021, and was supposed to be complete by the same date and month this year but to date, the project is yet to be complete.

Authorities from the Malindi municipality board led by the board Chairman Geofery Katsole and the Municipal manager Assad Sheyumbe have been reluctant to furnish journalists with information regarding the costs despite numerous phone calls and text messages inquiring about the progress and costs of the project.

At one time the project completely stalled but last week operations resumed but at a slow pace and it is not clear what is causing the delay.

Kilifi county Chairman of Kenyan national Chamber of Commerce and Industry (KNCCI) Majid Swaleh told journalists that the stormy water drainage project was supposed to collect water from the main roundabout to the Indian Ocean.

he said the project was good and that the Municipality engaged them as a business community to be informed about the plans to begin the project and they supported it 100 percent.

“We had agreed with them to start from Star hospital going towards town and advised them to ensure while in town the project should go fast as it would affect businesses but for now the project has stalled for over three months and we do not know the reason,” he said.

Swaleh said the large trenches dug by the contractor have been left open making it difficult for people to access business premises,” he said.

Currently, when it rains water flows up to people’s businesses and residential areas and some residents have had no water for several months since the trenches were dug and cut water pipes.

“We understand this project was funded by the world bank but to us, those who were funded to implement the project have failed we suggest that they cover all the dirt they removed back to the trenches cover it so as to make the roads accessible as some roads have been closed for the last three months,” he said.

Nadia Maria from Raghib Store in Malindi a business that deals with construction materials said the drainage project took longer than the duration that the authorities promised.

Currently, roads are closed despite the fact that it’s a crucial route that links the Central business district to the main market of the town.

“It has affected us as a business community here at Raghib store and even many other businesses because there is no access for our clients, even vehicles are not able to pass or park to load and offload cement, iron sheets, and other construction materials,” she said.

Maria said currently sales have gone down and called on the authorities to speed up the completion of the project so that normalcy resumes.

Hamisi Musa a resident of Barani area which is one of the affected residential areas said since the project started many businesses have been affected as the project was done at a slow pace.

He said for the last three months they have had no water as the pipes were destroyed.

“They said this project would help drive stormy water which used to be stagnant but up to now we have not seen the benefits because they have contributed to many problems,” he said.

“Since Covid 19 businesses collapsed we have so many debts, this project has contributed to more losses this road was the one used by our clients to come to our shops but now it is impossible,” he said.

Mohamed said they are affected economically, and healthwise and called on the municipality to take action quickly to complete it and also compensate them.

Benjamin Ziro a bodaboda operator from Barani area said they were promised jobs when the project begins but they never got any opportunities to work.

Further, he said their customers are those who come from the shops but due to lack of access it has been difficult for them to get customers.