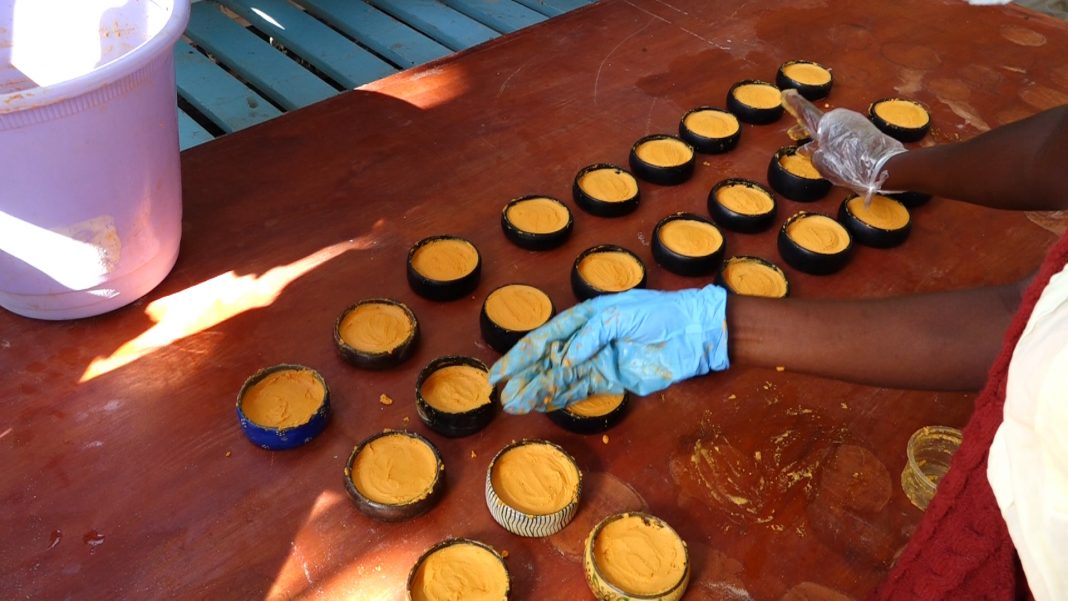 After the Covid-19 pandemic affected tourism at the Coast, women who are beach operators in Malindi have turned into making bar soaps from local natural ingredients to cushion them against the pandemic.

The Baharini women group has been depending on tourism to get income but since the pandemic stuck tourism sector has been doing badly forcing them to come up with survival tactics.

Initially, they began making jik, and handwashing soap before venturing into coconut oil and bar soaps all of which are sold locally to stakeholders.

Pili Kadzo from Baharini women group said the effects of the pandemic drove them to think of coming up with other incentives of making money as the hotels closed down leading to no business.

Speaking at the beach where they were doing their bar soaps she said the solid soaps are natural as they have no chemicals.
“Like this one today we have used pawpaw leaves, boiled them and got its juice and measured 15 cups, mixed with two cups of caustic soda and stirred them for 35 minutes until it cooled down,” she said.

Normally when they add caustic soda in the pawpaw juice it becomes very hot and must be left to cool down.

Later she said they added 15 cups of cooking oil in the mixture which became hard used bungles made from coconut to measure the bar soap sizes because they have no special equipment to do it.

Normally the bungles are sold to tourists but because there are no tourists they used them to get the bar soap measurements.

She said the soap takes 24 hours to dry completely and is ready to use.

Ms Kadzo urged the national government to waive the license fee for beach operators as there is no business at all.

“We hear there is funding for talents being given by the government we would appeal to them to remember us as women beach operators to uplift them so as to succeed in our new venture,” she said.

She said they were happy that government officials together with the Association of women in tourism, and Progress Welfare Association of Malindi (PWAM) officials came to see their work as it gave them hope for the better in the coming future.

She said the Kilifi county government should emulate their Mombasa counterparts who trained over 300 beach operators so that they can also get skills.

“In Kilifi county, nothing has been done to celebrate tourism, many of them have nothing to celebrate in the tourism sector,’ she said.

She said the soap they make is good for skincare and removes rushes and makes them smooth.

Consolata Agutu the chairperson of Baharini Women Group called on the Kenya Bureau of Standards (KEBS) to visit them at their place of work and see their work so as to check the standards of their products to enable them to hit the market.

“We are in Malindi at the access road of the blue key to come and sensitize us and even certify our products to be able to sell our brand, currently we are unable to package our products we use pieces of cloths,” she said.

She said tourism has highly been affected and has not received any support from the government so as to cushion them against the pandemic.

So far she said their children have no school fees there is a challenge in getting daily bread and they hope their new business will generate income for them to survive.