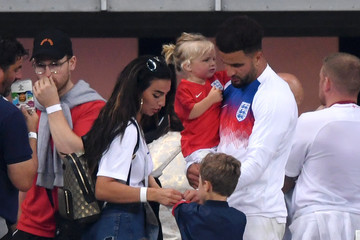 She reunited with Man City ace Walker despite his string of affairs. A source said: “He’s getting a taste of his own medicine.”

And things got worse when he got a red card in England’s match against Iceland earlier this month.

Annie, 27, mother to his three children, wept as she revealed her trysts with Joshua, 20.

She insisted the romance began after she and Walker, 30, split in February when it emerged model Lauryn Goodman was pregnant with his child.

Annie told pals her affair with Josh ended when she and Walker got back together — and he proposed — in June.

But the £150,000-a-week Manchester City ace is suspicious that his childhood sweetheart is still close to Josh.

The astonishing twist comes after Walker was involved in a series of sex scandals over the past 18 months — including his fling with Lauryn, resulting in their son’s birth in April, and romping with a reality TV star in his car.

A source said: “Kyle is devastated but after everything he’s put Annie through he’s now getting a taste of his own medicine. And it’s proving to be a bitter pill to swallow.

“He and Annie had got engaged and were talking about the future.

“It all seemed to be settling down — and now this. Annie’s confession has knocked him for six. He doesn’t feel like he can trust her anymore.

“He knows he doesn’t have a leg to stand on but he’s stung by it because Annie has always been the perfect partner. He’s now worried she still has feelings for Josh and it is driving a ­massive wedge between them.

“This could be the straw that breaks the camel’s back.”

In March last year World Cup hero Walker romped with Ex On The Beach star Laura Brown in his £200,000 Bentley in a drive-through coffee bar.

Fuming Annie kicked him out of their £6million Cheshire home but then agreed to give him another chance. They were working on their relationship, and Kyle was moving back in, when he slept with Instagram influencer Lauryn, 29.

Annie had no idea until ­February this year when sheepish Walker rang from the club’s training ground to confess — and told her that Lauryn was pregnant.

Walker was given his marching orders for a second time and moved into an £8,000-a-month flat in Hale, Cheshire.

In the meantime, devastated Annie was introduced to Josh by a mutual friend and the pair began dating.

At the same time Walker was forced to apologise for breaching lockdown restrictions by hosting a £2,200, three-hour sex party with hookers.

“She saw no future for her and Kyle after everything he had put her through so she threw herself into it.

“They were both aware of the consequences if it got out so they kept it quiet. They didn’t want to cause any upset.”

Annie is said to have called time on the relationship with Josh after Walker fought to win her back.

In June the couple got engaged — Walker proposing with a £250,000 ring he helped design. The Sun also told how he set up a floral heart of white roses, surrounded by petals and candles, at their £6million home.

In an exclusive interview with The Sun on Sunday at the time, Annie, who has been with Walker since their teens, admitted: “If I ever forgave Kyle and took him back, would I be a bit embarrassed of how people feel? Definitely.

“Would it be yesterday’s news? Definitely. I don’t give a toss about what people think of me. I am a mother of three beautiful kids and they will always come first.

“I want to keep our family together — and if I’m able to put my feelings to one side to achieve that then so be it.

“Nothing Kyle does will take the pain away but I want my family to stay together. My kids want their daddy.

“I hate what he’s done to me but deep down I know he’s not a horrible person.”

Annie later praised The Sun on Sunday online saying: “Thank you to The Sun for finally getting the truth out there.”

A source who knows Lauryn said she was furious over the way she feels cut off by Walker.

It comes after she took to Instagram earlier this month and aimed a series of digs at Walker and Annie.

One message claimed her and Walker were ­having an affair for longer than he originally admitted to.

Walker has recently fought his way back into the England squad.

Before his comeback Lauryn posted a message on Instagram saying: “I’m a role model. Yea okay hun. Whatever makes you sleep at night.”

It was viewed as a response to an ­interview Walker gave after joining up with the Three Lions squad, apologising for breaking Covid lockdown.

Walker said: “Obviously me and the boss Gareth Southgate spoke after the lockdown incidents and he assured me that we all make mistakes.