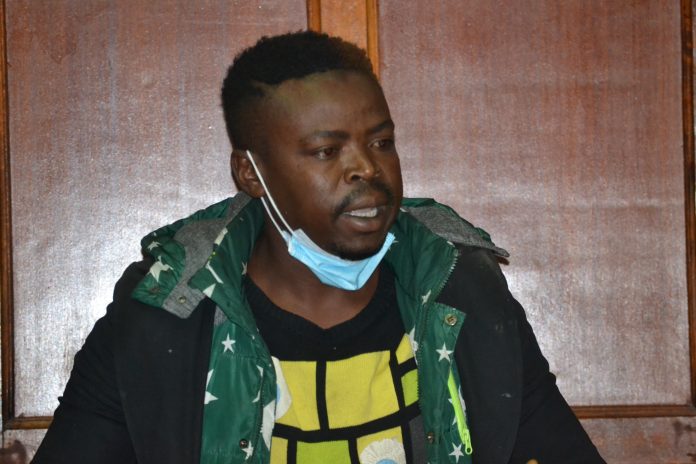 Wycliffe Aloys Orinda was today charged with creating disturbance at the Milimani law courts. The accused was before chief magistrate Martha Mutuku and pleaded guilty of the charges. – By Meshack Makau.

It was said that on the material day of January 11, 2020 at Revlone plaza along Biashara street in Nairobi, Mr. Aloys insulted and threatened Mary Nyanguthii pulled the banner of her business hence bringing the business to a standstill. Ms. Nyanguthii is a sales lady.

In his mitigation, the accused told the court that he staged the drama because Ms. Nyanguthii was hiding his wife Caroline Wambui who ran away with his two children last year. Mr. Orinda told magistrate Mutuku that Ms. Nyanguthii conspired with his wife last year to send him to Industrial Area prison.

The reason of the said conspiracy was to give room to his wife to take away the kids. The accused was however remorseful and asked the court to pardon him. He further told the court that he was under influence of ‘something’.

“Your honor I was under influence of bang, Senator keg, Blue ice and Safari cigarrates. Although whenever I use these things am stimulated to work. I don’t use them to bring trouble to people,” said Mr. Orinda
In her ruling the magistrate ordered for suspect to be remanded and brought back to the court on February 10, 2020.

“You will be remanded until February 10, 2020 as the court waits for a report from the probation officer,” ruled the magistrate.