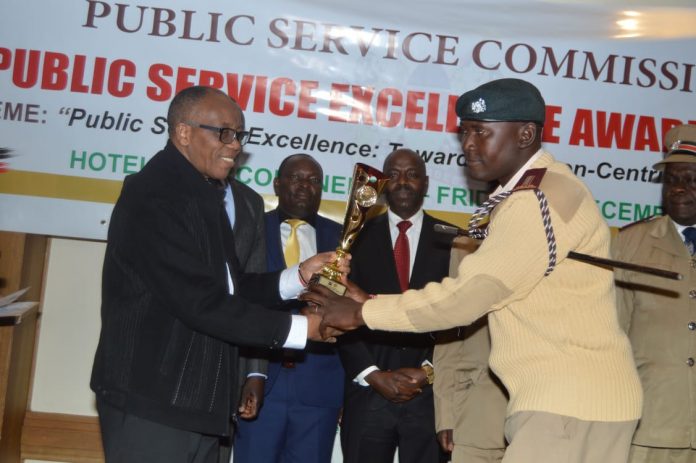 He wakes up early every morning with a full diary of what awaits his daily tasks. – By Ramadhan Kambi.

In the remote and rural villages of Mitangani location in Bamba ward, Kilifi County, Stephen Thethe, the current acting Mitangani location chief never misses an opportunity to address the locals, holding unending barazas and a number of meetings daily.

His dedication to end child marriages, unwanted pregnancies and the killing of the elderly has put him on a national recognition which saw him recognized and awarded by President Uhuru Kenyatta in December 2019.

He was also praised due to his efforts to look for investors and drill boreholes for drought-stricken residents in Goshi, Ganze.

In recognizing him, the President said that he was among the best performing chiefs in the country and as thus, was feted during the Public Service Excellence Awards that were held in Nairobi.

In an exclusive interview with Uzalendo News, Chief Thethe said the award gave him even more efforts to fight for the vulnerable in the society apart from giving most of his full-time to commitment to addressing social challenges in the entire Mitangani location.

“There are so many things that I have done to the people of Goshi and Mitangani. among them was the sourcing of donour to sink borehole at Kavunzoni village in Goshi Sub location. I also been seeking for donour support in bringing relief rations to the community,” he said during the interview.

Mr Thethe is also accredited for the construction of an assistant chief’s office in Goshi.

“I have also been engaging the community in sensitization programs to make sure that the killing of the elderly comes to an end.

The elderly killings have been one of the bad examples for this region where the execution of their elders was fast increasing. But we have worked with the security agencies, political leaders and the community in general to bring this challenge to an end. It is working well now,” he said.

“Again, I have been leading a number of peace meetings to bring cohesion among the pastoralists and the local community who are farmers. That has brought a lot of calmness in areas that witnessed some hostiles years back in like Gede. Both the community and the herders are now living and working peaceful,” he said.

“We have made sure that the Watha minority community is also recognized in leadership, also worked hard to make there is a police post at Ndarako and we recently started the process of registering the Mitangani/Gede community ranch so that the process of titling the huge land by the government starts,” the chief said.

He has also initiated the construction of a chief’s office at Mitangani location that will be stationed at Rima Ra Pera.

“I am happy because the recognition gave me more courage to continue serving my people, giving them hope amid difficulties,” Mr Thethe during the interview.

He said that amid girl child challenges in the remote villages, he launched a community participation programme, where together with the community looked for girls who dropped out of school for marriage to have them returned back to class.

“That has worked magic and we have now many girls who even after giving birth went back to class to pursue their dreams,” he said.

The 37-year-old father received the award at a ceremony organised by the Public Service Commission to commemorate public servants who have recorded exemplary performance.

“I dedicated my award to the people of Mitangani, and the entire Ganze constituency for their efforts to live peacefully despite the myriad of challenges they have to endure on a daily basis.

“Ganze and Goshi and Mitangani in general has a lot of challenges but the people’s keenness to address these challenges is overwhelming. They have stood by me and I am thankful,” he told Uzalendo News.

In supplementing the chief s efforts in addressing girl child education, Ganze MP Teddy Mwambire has said that girls in Ganze who give birth will have to continues with their education at Kafuloni Secondary school.

In an interview with Uzalendo, Mr Mwambire said girls who have given birth at a tender age have the rights to continue with education but a special school for them is even more prudent.

“Currently some of the girls return to normal girl schools but we want to have them sheltered and learn at Kafuloni secondary school. We want to change that school to be a girls only school for the teen mothers,” he said.

The MP was among Ganze leaders who who congratulated the chief for the award, saying it was a demonstration of good leadership.

“On behalf of the great people of Ganze Constituency, I take this opportunity to congratulate Mr Thethe for winning a lucrative award – Citizen-focused service delivery – for the distinguished services he has been offering since he landed his job.”

“It is indeed commendable when we see administrators offering selfless services to the public.”