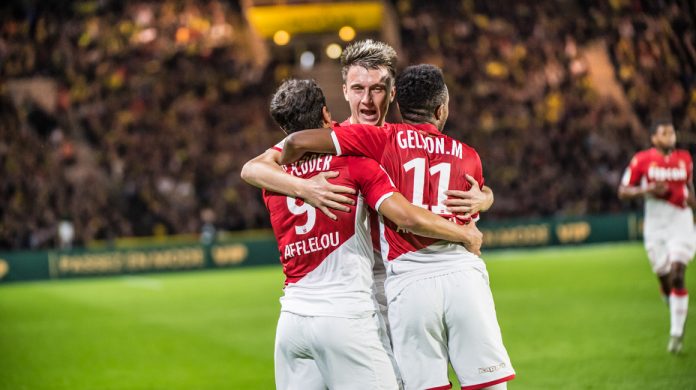 20 year old Sofiane Diop and Guillermo Maripan scored to give Monaco the points as they stretched their unbeaten run to 11 games and moved to within two points of their opponents, who sit in third place.

Five days after humbling Barcelona in the Champions League, the French champioms lacked inspiration as they fell 4 points behind Lille, who have 58 points from 26 games after a 4-1 win over Lorient on Sunday.

Olympique lyonnais are second on 55 points followimg a 3-2 win at Brest on Saturday.

“We were not at the level we need to be at to win, and as coach I take responsibility for that,” said coach Mauricio Pochettino.

“We spoke about the importance of maintaining our concentration levels, but we can’t exactly replicate our performance from one evening to the next.”

There is now a genuine chance that PSG will miss out on the Ligue 1 title for the first time since Mbappe’s Monaco pipped them in 2017.

Mbappe, who scored a hat-trick in PSG’s 4-1 victory over Barcelona came onto the match against his former club with all defensive focus on him due to Neymar snd Angel Di Maria  injuries.

Monaco’s boss Kovac said, “I am very happy with the performance of my team. PSG are a great team. We played very hard and deserved the victory. They didn’t have a lot of opportunities. I have to congratulate my players.

Our plan? We had to erase Kylian Mbappe because he’s a great striker. We had to deprive him of the ball by putting three or four players on him.

In defence, we sohwed another side of Monaco because we didn’t concede many chances. Tonight was wonderful, it’s what we needed.”

PSG’s defence of the Ligue 1 appears to be wanting as they have lost a sixth league match for the first time since 2010-2011.