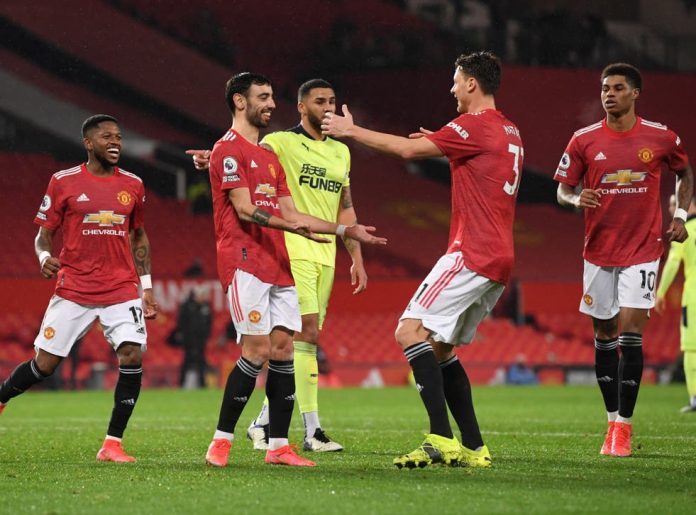 Manchester United moved back up to second place in the Premier League after a victory over Newcastle at Old Trafford on Sunday. – By Madellene Kalunda.

Marcus Rashford, Daniel James and Bruno Fernandez netted the goals for United. Rashford had scored with Manchester United’s first shot on target after Newcastle had made all the early running and created the majority of chances.

Rashford also won the penalty in the second half which allowed Bruno Fernandes to make it 3-1, after a rash tackle from the on-loan Arsenal midfielder Joe Willock.

Rashford’s opener was his 40th goal in all competitions since the beginning of last season. Daniel James’ strike was superb. It put them on lead. That drained Newcastle of whatever hope they had of winning.

As for James’ performance, Solskjaer said, “we’ve targeted a few games for his X factor. We felt we needed his energy tonight, tge width he gives. I’m delighted for him to get a goal, and he’s ready to go again.”

United didn’t create too much going forward and they didn’t look comfortable in defence. Harry Maguire, in particular, looked shaky. The United captain played a massive role in Newcastle’s goal, after he got away with ‘elbowing’ Jamaal Lascelles, which did not get checked by VAR.

Ole Gunnar Solskjaer’s side were superb against Real Sociedad on Thursday, impressive in every department, with four goals. They were so dominant it had destroyed the Spanish side’s confidence.

Solskjaer insisted his players had coped admirably with the disruption caused by a Covid outbreak at the club.

With three members of his coaching staff – Mike Phelan, Darren Fletcher and Kieran McKenna – missing from the bench after a Covid outbreak –  the visitors were still sharper at the start of the second half, Saint-Maximin forcing another save from de Gea.

Steve Bruce’s side are just three points above the relegation zone and if they do not beat Wolverhampton Wanderers next weekend, owner Mike Ashley is surely going to have a decision to make on whether to let Bruce continue as head coach or not.

Liverpool Returns to Winning Ways after a 2-0 Sheffield Thrashing