Mothers in motion: mums navigate cities with their kids’ needs in mind 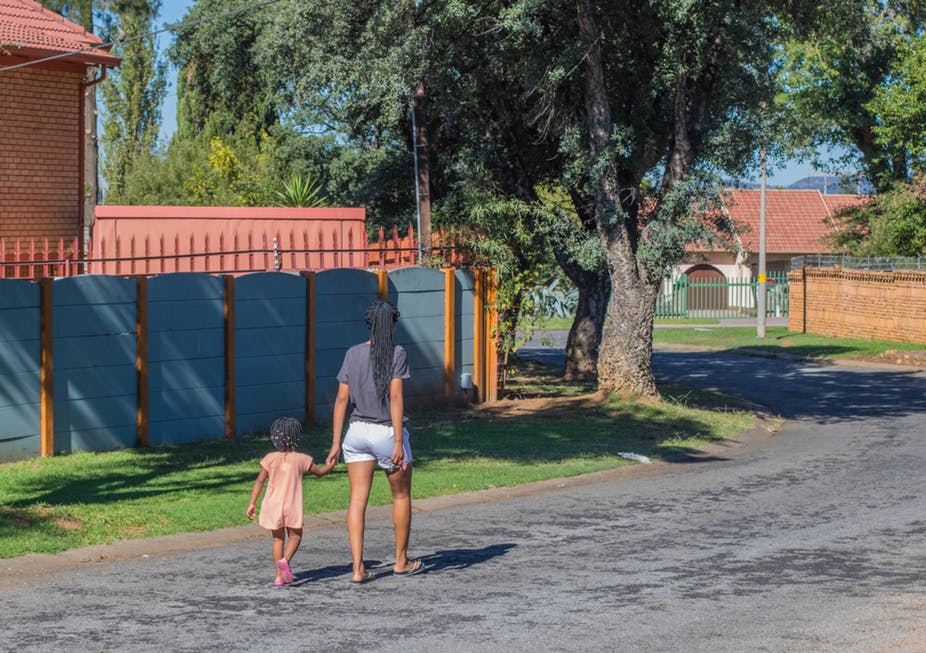 Portia* lives in Diepsloot, a poor settlement composed largely of informal dwellings in Johannesburg, South Africa and works in upmarket Sandton as a domestic worker. She lives with her two daughters; one is 27 and the other, Dineo, has just turned 18. Portia’s eldest daughter has a seven-year-old son who also lives with them.

Dineo is at school in Hyde Park, close to her mother’s workplace. They travel separately in a minibus taxi for 90 minutes to reach school and work each day, and another 90 minutes to get home.

On weekends Portia and her family attend church in Rosebank – that’s another 90-minute taxi ride from home – and relax at Zoo Lake, close to their church. Portia strives to spend as little time as possible in Diepsloot. She will travel extensively and expensively to do so, generating a large spatial footprint in the city.

This is contrary to what researchers would expect. Rational economic theory proposes that people make decisions primarily based on cost and time. In Portia’s case this would mean spending less money on transport and more time in Diepsloot. But Portia’s focus is on getting away from Diepsloot, because she believes being in the area isn’t what is best for herself and her family.

Portia was among 25 mothers who participated in a joint research project between the South African Research Chair in Spatial Analysis and City Planning at Wits University and the Gauteng City-Region Observatory.

The research, conceived by urban planner, researcher and new mother Yasmeen Dinath, aimed to explore mothers’ everyday activities in Johannesburg. Women frequently remain the primary caregivers and only a third of children in South Africa live with their biological fathers. This means that mothers still disproportionately shoulder the responsibility of children. The first phase of the research was published as a research paper, Motherhood in Johannesburg: Mapping the experiences and moral geographies of women and their children in the city, by myself and my colleague Margot Rubin.

Unfortunately, urban environments have historically neglected the needs of women and children. In the 1990s the Austrian capital, Vienna, began addressing this specifically through gender mainstreaming or the fair-shared city: an urban planning policy directed at creating better public spaces for women.

South Africa’s colonial and apartheid history adds an extra layer of complexity. It created an unequal society and cities that were racially segregated. Even today, socioeconomic inequality is exacerbated by spatial differences. This means poor women tend to live far from jobs, schools, and transport.

This affects housing conditions, employment opportunities, availability and cost of transport, and access to quality childcare and education. It is critical to understand how mothers from all backgrounds navigate these obstacles within the city as part of their daily lives.

We selected mothers through the researchers’ connections and snowball sampling, asking participants to refer us to other mothers. The small sample was diverse: the youngest mother was 19 and the oldest was 54; some mothers were unemployed, some worked full-time, some worked shifts and others stayed at home. Some had children who were infants, some had older children, some were grandmothers and some mothers did not live with their children. They came from a variety of locations in Johannesburg, living in different housing types and with varied economic means.

Then we interviewed these women about their daily lives and the decisions they make for themselves and their children. The interview explored a mother’s domestic situation; her work situation; shopping and providing basic needs for her children; schooling; medical care; resources to assist with childcare and her other responsibilities and roles.

Footprints on the city

We transferred this information to maps of Johannesburg to understand the extent of each mother’s footprint in the city. Some had very small footprints that created contained worlds for them and their families. One said:

My decisions are based mostly on proximity. I am trying as much as possible to create a world that is quite close.

Others, like Portia, had bigger footprints that incorporated large parts of the city. These spatial patterns were informed by accessing employment and education for their children. In some cases, these decisions were influenced by access to transport, disposable income or additional support from family members. But this is not the full picture.

Even though each mother’s circumstances may vary significantly, their decisions were based on what they felt was best for their children and what they felt “good mothers” do.

These are not universal ideas. They are informed by cultural backgrounds, ideologies and mothers’ identities. Some mothers felt the “good” thing to do was to create small, tight-knit worlds for their children in their own neighbourhoods. Others, like Portia, believed it was best to venture further afield to find new spaces for their children.

Many of the mothers had shared frustrations in Johannesburg. Mothers struggled to find public places where they could comfortably breastfeed or change nappies. Some mothers felt their children were in danger in their own neighbourhoods, at risk of being run-over or kidnapped. Travelling on public transport, particularly minibus taxis, is difficult with infants or toddlers. Mothers grappled with the time constraints of employment and providing for their children and the task of caring for and raising their children. Many everyday activities are difficult to navigate for mothers.

Some of these difficulties can be addressed with practical measures. For example, mothers felt unsafe using parks during the week in diverse parts of the city and so aspects of security could be tackled in these spaces. As in Vienna, public spaces need to be designed for the more vulnerable in society, including women and children.

However, we also need to understand the value judgements that influence mothers’ and families’ decision-making. What is “best” for mothers and children is not universal and varies according to a mother’s background, identity and her own values. These differences drive the varied footprints in the city seen in this research. Understanding these different moral perspectives could enable mothers to more easily incorporate daily activities that feel “good” to them and ease their emotional burdens.

*Not her real name