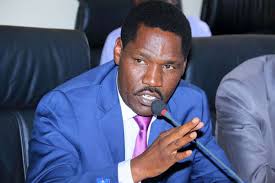 The launch will take place at Ahero multipurpose hall in Kisumu county.

The digital platform will enable 200, 000 small-scale farmers, to enlist for the supply of farm inputs at subsidized rates.

Agriculture PS Hamadi Boga on Tuesday in a virtual press briefing ng said ahead of the launch of the e-voucher digital program, that farmers in 12 selected pilot counties will benefit from the new system which is tailored to improve food production in the country.

However only registered farmers will be eligible for the voucher to be issued by respective county governments.

Other services will include subsidized soil testing services, seeds, fertilizers, post-harvest handling tools and other inputs needed to increase production after the government scrapped off a decade-long subsidy scheme implemented by the National Cereals and Produce Board

The new approach commonly known as the e-voucher program falls under the National Value Chain Support Program and intends to empower small-scale farmers to produce more and facilitate efforts to make the country food secure.

“Under the e-voucher system, farmers will receive a voucher from their respective County Governments to buy farm inputs from the nearest agro-dealers, who will later claim their payments from the government,” Boga explained.

The programme targets 1.4 million farmers by the year 2023 and 2,300 agro-dealers will be involved in the provision of the farm inputs to the tune of Sh 700 million.

The program is part of the government’s digital agenda that is designed to improve the fertilizer subsidy program.

Further the ministry will be focusing to unlock the over 500,000 acres of agriculturally productive land that was underutilized while encouraging farmers to invest in an agro-processing venture to improve the value chains.

In 2008, the government started the subsidized fertilizer program to cushion farmers against high prices of fertilizer and also help in improving productivity.

However, over the years, unscrupulous traders colluded with officials at the National Cereals and Produce Board by buying the subsidy fertilizer which they repackaged and sold to farmers at a higher price.

The launch comes after the government in November 2018 proposed to use e-vouchers for farmers to buy subsidized fertilizer from private agro-vet shops, to weed out unscrupulous traders who had infiltrated the distribution chain to cash on the bureaucratic process at the time.

Rice farmers from Ahero in Kisumu County and Mwea in Kirinyaga County will be the first beneficiaries of the e-voucher for the coming planting season.  About 85 per cent of Kenya’s farming population consists of smallholder farmers, making up about three million producers.