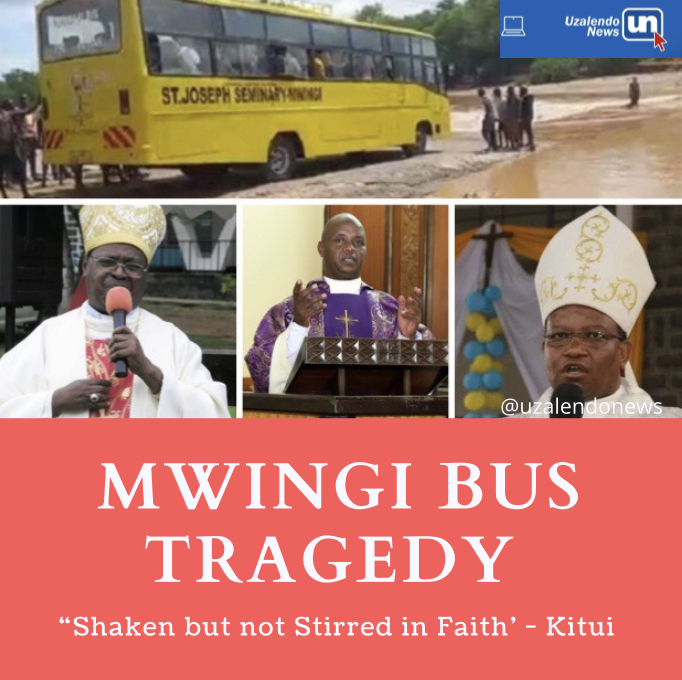 Behind the cameras, the Catholic Diocese of Kitui is in deep mourning.

Weren’t it  not for the strength in depth of the Catholic Faith, and the firm believe in life after death, the gloom would have shaken the Mwingi Parish.

For starters, St. Joseph’s Seminary, the owners of the ill fated bus, is the religious faith Garden of the Diocese of Kitui.

Since time immemorial, the school has laid a firm foundation for Priests, the lay and the religious. For Kitui and beyond.

Students are not selected based on KCPE performance…but on an aptitude test administered through the parishes of the Diocese.

And so the school caters for the entire present day Kitui County. It is the undisputed religious ‘national’ school in Kitui.

And thus, whatever happens at or to St. Joseph’s shakes the entire County to the core.

Now they are no more.

The sheer dejection has been complicated by its timing: at the tail end of the year of St. Joseph, on 8th of December.

On this special day, St. Cecilia Choir would have belted lovely songs to celebrate the feast of our lady of Conception. A special day in the Catholic Church calendar, celebrated during the advent.

Read More  Nine Arrested Over The Murder Of A Teenager

But most of them will do so in heaven.

From the desperation to attend a wedding of a cousin to Father Kityambu, to the impatience of Choir members to cross the hungry and angry river Enziu.

Read More  Why UK Prime Minister Is Under Pressure To Quit

Kitui Catholic Bishop Rt Rev. Joseph Mwongela has behind the scenes been rallying his priests to support the families of the bereaved during this period.

Mwongela and his predecessor Archbishop Anthony Muheria have been key on encouraging couples to wed in Church, so that they can participate fully in Church Sacraments.

The wedding is seen in this context. And it sure must be consummated, if it didn’t happen on the fateful day.

The Diocese stretches from Kibwezi to Tseikuru. It borders Machakos, Embu, Garissa and Malindi.

It sponsors some of the best schools in the Ukambani such as St. Charles Lwanga, St. Angela’s, St. Ursula, St. Patrick Mulumba among others.

Kitui was initially ran by the Missionaries from Northern Ireland.