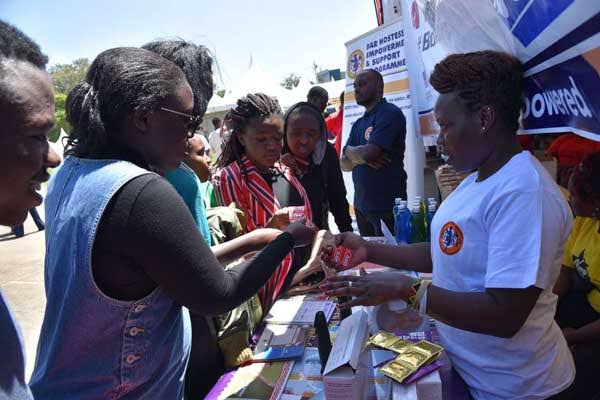 Nairobi County has been awarded for its consistent efforts in offering requisite health solutions aimed at controlling the prevalence of HIV and AIDS.

This was attributed to the tireless commitment by staff working in comprehensive care clinics and programs aligned to the HIV programming initiative at the county.

Chief Officer for Health Mohamed Saleh while receiving the award said that the county has continued to invest heavily in the fight against HIV through Civic education, staff qempowerment and key partnerships aimed at defeating the spread of the deadly virus.

“We have continued to be at the forefront in fighting the spread of HIV and we are proud to report that the HIV load and spread is reducing every year,” Saleh said.

The awards were organized by the Ministry of Health, through the National AIDS and STI Program ( NASCOP) held in Mombasa.

However, the county still has the highest number of adults living with HIV countrywide, translating to the highest workload in care treatment and supportive services.

In May this year, the county through the Program Quality and Efficiency(PQE) initiative supported the Global Fund reported that HIV prevalence had reduced from 6.1 percent to 5.9 in the last three years.

Two-year project runs at the Mbagathi Hospital and 19 other county health facilities.

Saleh said that the county will continue working with the national government, global and local partners in fighting the spread of the deadly virus.

“We remain open to all possible partnerships that will help reduce the prevalence to manageable levels,” he said.

The county targets to reduce the prevalence from the current 5.9 percent to at least 3 percent in the next three years.

According to Dr. Carol Ngunu – Gituathi the HIV Program Manager and Deputy Director Preventive, promotive Health in Nairobi, HIV prevalence are still at higher levels in the informal settlements within Nairobi.

” We still have challenges in the shanties in terms of access to Preventive and control measures but we have made tremendous progress in reducing the spread,”

She said that winning the award is a pointer to great teamwork and efforts of the CCC and HIV program teams in the county to ensure greater access to quality HIV services provision.

Perspectives from Kenya and Ghana on coronavirus preparations

Kenya is experiencing strange weather. What’s behind it

Trump is grabbing headlines. Why Africa can’t afford to be distracted

How we solved the mystery of the human sperm tail –...