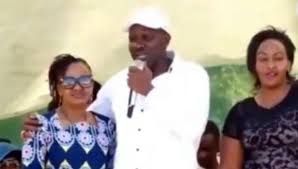 After being invited by Nakuru Senator Susan Kihika, at the Inua Mama campaign, Nakuru East Member of Parliament David Gikaria seized the opportunity to introduce his two wives.

“I’m the Nakuru East MP and when one has a wife or wives, he has to acknowledge them. I have several Nakuru Town East First Ladies. Let me introduce them to you,” Gikaria said while beckoning his wives to the podium. This is Veronica Wairimu, she is the First Lady number one.” He said