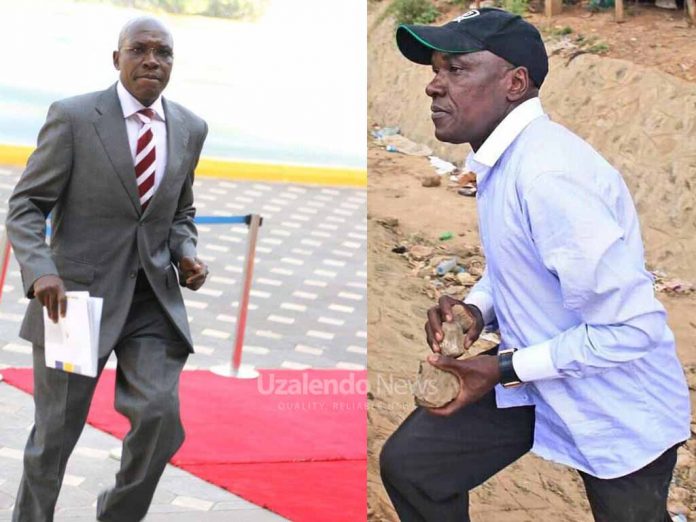 While trying to address and explain his confrontational tactics to the panel that included Rarienda Member of Parliament, and vocal critic Hon. Otiende Amolo.

Khalwale stated that as a man from the Luhya community, he vowed not to back down from the fight.

“Never in the culture of a Luhya man can you allow an uncircumcised boy to challenge you and you run away,” Boni Khalwale brazenly remarked.

A section of Kenyans in the Twitter community immediately criticized the leader claiming that the comment was irresponsible coming from a former Senator who has declared his ambition to run for the Kakamega gubernatorial seat.

This is the worst politician ever to be in Kenyan history he doesn’t know which side he is, i warned you Boni Khalwale don’t join DP Ruto or Jubilee crooked Regime but you didn’t listen now you will pay heavily & yur reputation is will be damaged before 2022 u can’t join UhuRuto said Haki na Ukweli Org.

Dr .Boni Khalwale is disgrace to luhya nation he is busy profiling a community yet he is eyeing to be a governor in a cosmopolitan county .Bure kabisa Dr. Stones Khalwale you utterances are sick like your name” wrote one Salim Barnabas.

Others really questioned the idea of circumsition as a matter of national importance, as opposed to the struggling Kenyan citizen.

“But if circumcision was a measure of greatness, Kenya wouldn’t be swimming in the turbulent waters we currently are swimming in when the circumcised are in leadership. The problems we face as a country require sobriety backed up with visionary and selfless leadership. The status of people’s manhood will definitely not get us out of our debt burden, neither will it create jobs to the many jobless youths,” Maophan Otwala Opiyo stated.

Boni Khalwale’s pictures and videos doing rounds on social media after he was seen engaging rowdy youth in Kibra.