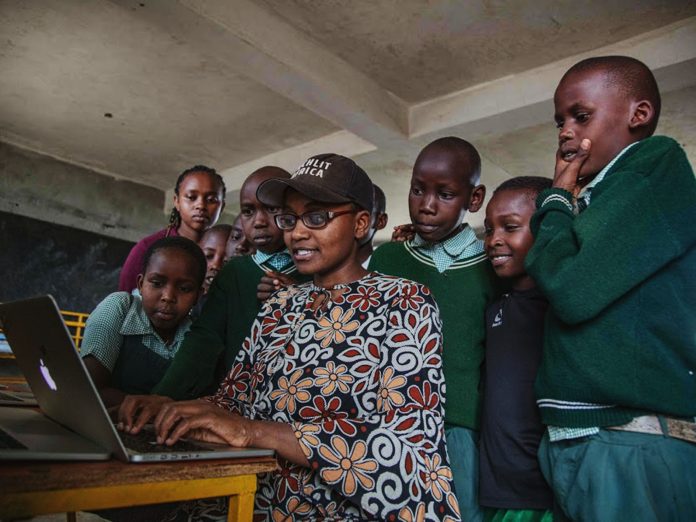 Nelly Cheboi the 29-year-old Kenyan village girl who made headlines globally after being named the 2022 CNN Hero of the Year has described the award as a win for African mothers who struggle to bring up their children.

Nelly came from a humble background in a remote village called Mogotio in Baringo County.

She beat all the odds to make an impact for her initiative to empower young people through her organization Techlit Africa that created computer labs for Kenyan School Children.

Ms Cheboi was raised up by a struggling mother, sleeping under leaking roofs in the remote village but still managed to reach where she is today.

“To see her in my school like walking in the campus the way I used to walk, to see her being in the places where I always go like in the apartment where I am living seeing her walking upstairs seeing her in the dining table that breached my true world because for so long that was just a strange place no one back home knew where I was, no one knew what life was in America, I couldn’t share that, like how do you describe snow,” she said.

During the sunny days meditation she would ream of having a better house built rentals so that her family could live well away from the agony and suffering caused by poverty .

“For me I knew that education gave me a better chance achieving my dreams , first of all I wanted to do well in KCPE so that I could get a scholarship so that my mum would not have to worry about educating me and work so hard so as to pay my tuition,” she said.

She also used to go to school with a lot of books so as to read anytime she had a chance.

Her efforts earned her the top position in the District during the 2006 KCPE examination and she was admitted in a national school- Mary Hill Girls School which was four hours away from her Mogotio village.

While in high school Cheboi also struggled with tuition fees as her mum could not afford to pay school fees.

She would often be sent home on different occasions due to lack of school fees.

Despite all that she managed still to get an A of 82 out of Mary hill girls school. So many people heard about it and one person knew about Zawadi Africa .

The award winner said she saved all the money she got from her casual job and in one year managed to move her family from her childhood shanty to a rental apartment with electricity , latrine outside and a water tank.

To her even as she thought of transforming her mother’s life she wanted to also empower people to move out of the poverty they were living in for the better in her village .

“I thought that the best thing I can do is have a school and the school is going to teach people creative ways of making money, instead of just focusing on the best people doing well in KCPE and then the rest are left to make it really rough for them to survive,” she said.

In 2015 Cheboi built a school and named it Zawadi after Zawadi Africa which was officially launched in 2016.

She said in the first year they had about 100 students but today the school is so big , it is a four floor building .

At the time of building the school Cheboi said it is when she discovered Computer Science and she realized there was an easy way to empower people without so much investments.

So far she said the school which is within the community is running well with over 300 children.

“It started very simple we just started bringing in computers into the school and then teach a few people how to use a computer and then we actually realized that we could actually take computers into other schools,” she said.

They embarked on that mission to take computers to school where they got a room and trained youth in that community to teach the children those skills.

To run the program in one school she said cost them Sh. 40,000 monthly.

Cheboi said the biggest challenge they have is not the computers but finding schools in the community that value the program enough and willing to pay for program.