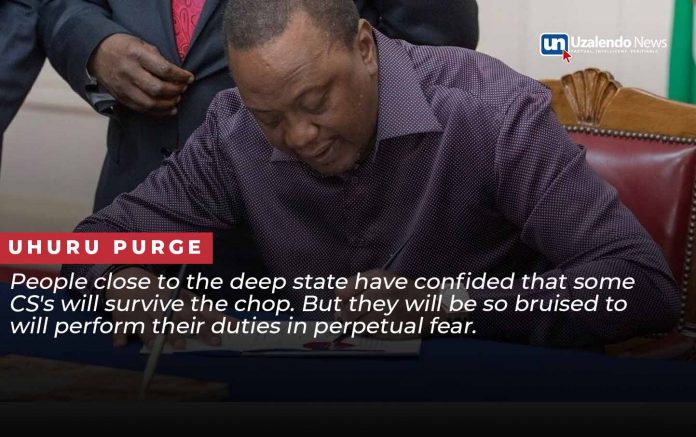 The increasingly ruthless President Uhuru Kenyatta has struck again. This time, its the core of his government: his cabinet, initially coined with the input of DP William Ruto – By Henry Kimoli.

The President has used the accrued leave provision as the excuse to suspend his cabinet. If you like, force them to proceed on leave.

Nobody knows for sure who will survive the sabbatical.

People close to the deep state have confided that some CS’s will survive the chop. But they will be so bruised to will perform their duties in perpetual fear.

The President is only concerned about his legacy and has little time for excess baggage.

Uhuru is inclined towards ensuring that hi BBI deal with Raila Odinga is implemented.

And so as expected, Raila will have a say on who returns from leave…is reshuffled or sacked.

His nominees to cabinet have maintained a studious silence since the sacking of Mwangi Kiunjuri and Henry Rotich.

They include energy CS Charles Keter and his labor counterpart Chelugei.

The duo can easily be replaced with Gideon Moi nominees from the Rift Valley. This should play out.

Make no mistake. The DP still maintains a professional relationship with Uhuru. He will have a body in the cabinet, even after they leave.

The mass appointments to various boards bore the Raila signature tune…he may sanitize a few of these appointments…or ship into the cabinet room one or two faces.

He is a silent political killer. The Wiper leader is a darling of the deep state currently. He will get his slot into the cabinet for sure…at whose expense? Dr. Monica Juma? Time will tell.

He has fought a good fight. He has won the race. He has kept the faith. Dr. Matiang’i is not easy to replace.

He has been the face of innovation in Government. When he speaks, the youth take note. Mucheru will stay put.

He has survived for far too long. James is a man under siege. Only a miracle will save him. However, he lost a huge chunk of his docket to ICDC, seemingly laying down the carpet for his exit.