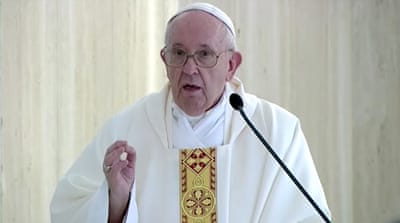 Pope Francis at his General Audience says in responding to the Coronavirus pandemic Christians are called to combat all violations of human dignity as contrary to the Gospel, and to work for the wellbeing of the whole human family and our common home.

Pope Francis, continuing his catechesis on the effects of the current pandemic in light of the Church’s social doctrine, noted how Covid-19 has highlighted how vulnerable and interconnected everyone is.

“If we do not take care of one another, starting with the least, with those who are most impacted, including creation”, he said, “we cannot heal the world.”

Christian love of neigbour amid pandemic

Speaking from the Apostolic Library, the Pope commended the efforts of so many people “who have been offering evidence of human and Christian love for neighbour, dedicating themselves to the sick even at the risk of their own health.”

But, he pointed out, “the coronavirus is not the only disease to be fought, but rather, the pandemic has shed light on the broadest social ills.” One of these, he continued, is “a distorted view of the person, a gaze that ignores his or her dignity and relational character.”

Pope Francis went on to say that at times others are seen as objects to be “used and discarded.” In reality, he said,  “this type of gaze blinds and fosters an individualistic and aggressive throw-away culture, which transforms the human being into a consumer good”.

But if we are guided by faith, noted the Pope, we recognize God creates men and women, not as objects, “but as people loved and capable of loving, in His image and likeness.”

The dignity of the human person

Pope Francis underlined that Jesus proposes a life of service and of giving one’s life for others, “and He confirms it by immediately restoring sight to two blind men and making them His disciples.” “We want to recognize the human dignity in every person, whatever his or her race may be,” he said.

The Pope continued on this theme by saying that the Second Vatican Council emphasizes that this dignity is inalienable because it “was created ‘to the image of God.’” In modern culture, he pointed out, “the reference closest to the principle of the inalienable dignity of the person is the Universal Declaration of Human Rights, which Saint John Paul II defined as a  ‘milestone on the long and difficult path of the human race.’”

The power of faith

While the world awaits a cure to the coronavirus, Pope Francis stressed that “faith exhorts us to commit ourselves seriously and actively to combat indifference in the face of violations of human dignity; faith always requires us to let ourselves be healed and to convert from our individualism, both personal and collective.”

May the Lord “restore our sight”, the Pope said, “so as to rediscover what it means to be members of the human family.