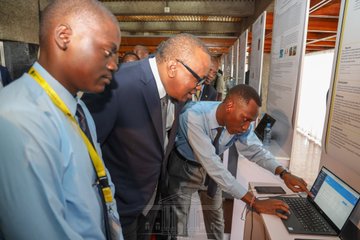 The President said the country’s future lies in scientific innovations and called for concerted efforts by all stakeholders to ensure that transformative innovations are adequately safeguarded.

President Kenyatta who spoke when he presided over the official opening of the second Young Scientists Kenya National and Technology Exhibition at  KICC in Nairobi County directed relevant state agencies to secure intellectual property rights for young innovators.

Young Scientist Kenya (YSK) which is a joint project by the ministry of education and the government of Ireland is aimed at promoting innovations by young scientists. This year’s exhibition attracted 235 entries and is attended by over 45,000 participants among them students from across the country.

The President said the government is implementing the Competence Based Curriculum (CBC) to keep up with the fast changing world characterized by remarkable advances in science and technology particularly in information, communication and computing.

“This system (CBC) goes beyond the learning of science and technology that typified the old order and instead lays emphasis on practical learning in Science, Technology, Engineering and Mathematics (STEM), ” he said.

The Head of State said CBC is “a fit-for-purpose learning system” that offer all learners an opportunity to delve deeper into scientific fields enabling them to achieve their aspirations.

To boost young innovators, the President announced plans to hold a national business bootcamp within the next 9 months to refine viable innovations into commercial projects.

“Further, and to encourage linkages with industry, I similarly direct a waiver of trademark fees with respect to all innovations emanating from Young Scientists Exhibitions, beginning from 2018,” the President announced.

President Kenyatta said his administration is keen to replicate the Irish model of supporting innovation by offering special incentives for private sector investors who support innovations by the youth.

“Between our young scientists, the private sector and the government, we can ensure that the next groundbreaking discoveries and innovations in science and technology are of Kenyan origin,” he said.

The President challenged young scientists to develop innovations aligned to the country’s Big 4 and Vision 2030 development agenda whose aim is to transform the lives of ordinary Kenyans.

“Focus on cost effective innovations for enhancing our food and nutrition security, housing, universal health care and manufacturing, will be highly appreciated,” he advised.

Amb Fionnuala Quinlan of Ireland assured the President that her country will continue partnering with Kenya to ensure innovations by young people continue to improve so as to contribute more to the development and transformation of Kenya.

Others who spoke during the event were Education CS Prof George Magoha and Vocational and Technical Training PS Dr Kevit Desai.