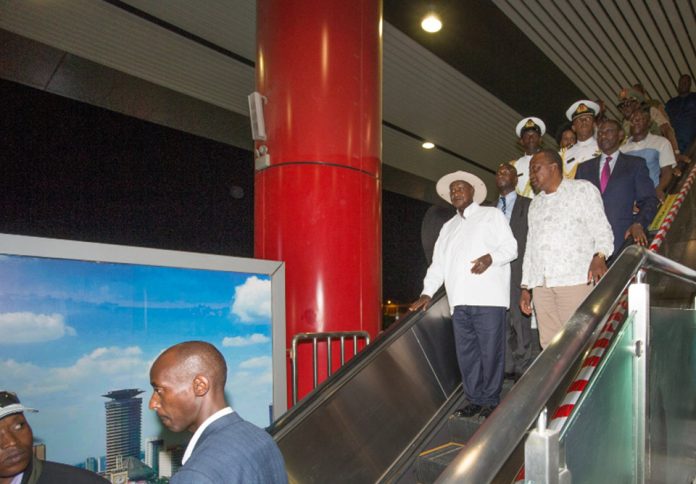 President Yoweri Kaguta Museveni of Uganda made a historic ride on Kenya’s Standard Gauge Railway (SGR) from Mombasa to Nairobi making him the first foreign  Head of State to use the service.

President Uhuru Kenyatta set the pace for the historic journey yesterday when he announced that President Museveni would travel from Mombasa to Nairobi on Kenya’s new modern railway line whose predecessor was christened by British colonialists as the “Lunatic Express”.

“Once again you are making history by being the first Head of State to come to Mombasa on the occasion of a State Visit,” said President Kenyatta when he hosted the visiting Ugandan President for a state banquet at State House Mombasa.

“Again, President Museveni will tomorrow be the first Head of State to travel on our SGR from Mombasa to Nairobi. You have once again made history and showed the remarkable partnership that exists between our two countries,” said President Kenyatta.

The old railway line from Mombasa to Kisumu and later to Kampala was built by British colonial government from 1896 to 1906 and was initially named the Uganda Railway after its ultimate destination.

The SGR runs parallel to the old metre gauge railway line. Passenger trains run between Mombasa Terminus in Miritini and the Nairobi Terminus in Syokimau near the Jomo Kenyatta International Airport.

On arrival at the Nairobi SGR Terminus, President Museveni was received by his host President Uhuru Kenyatta who was accompanied by Deputy President William Ruto among other senior government officials.