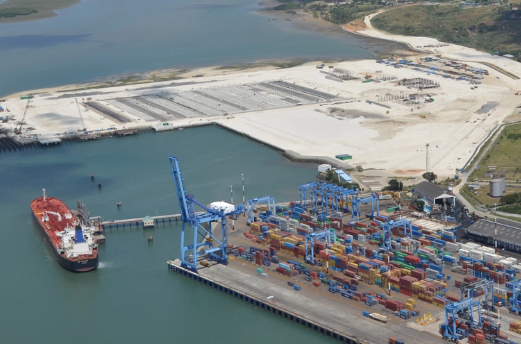 President Uhuru Kenyatta and visiting President Yoweri Kaguta Museveni toured the Port of Mombasa where they were briefed on the operations and recent developments at the facility.

The Transport CS pointed out that over 3 million tonnes of cargo was moved via the SGR between January 2018 and January this year.

In his presentation to the two Heads of State, Kenya Ports Authority Managing Director Daniel Manduku highlighted the improved performance of the port and the ongoing expansion of the facility.

Kenya Revenue Authority (KRA) commissioner for customs and border Control Kevin Safari and Julius Rubagumya, the Uganda Revenue Authority Manager in Kenya, spoke on the achievements in cargo transportation between the two countries since the implementation of the Single Customs Territory (SCT).

Safari said the implementation of the SCT has eliminated duplication of customs procedures in Kenya and Uganda leading to a reduction in cargo clearance time.

On his part, Rubagumya explained the benefits of the SCT saying it has enhanced cargo security through the Regional Electronic Cargo Tracking System in both Uganda and Kenya.

“Enhancing cargo security through the Electronic Cargo Tracking System is a huge relief to our governments but more so to the private sector. We used to have issues of escorts where police would escort cargo from here to Malaba and if you miss an escort on Friday evening maybe you are likely to get escort on Monday,” said Rubagumya.

“I am pleased to report that the physical escort is now history. We are using Electronic Cargo Tracking and we have monitoring centres both in Kampala and Nairobi such that as the trucks start the journey at the port, our officers on those centres are monitoring their movement,” he added.

Rubagumya said that along the roads there are also rapid response units that ensure no one diverts cargo or evades paying tax.

While at the port, President Kenyatta inspected the ongoing construction of the modern Cruise Ship Terminal that is currently 40 percent complete.

Briefing the President on the benefits of the cruise ship terminal, Tourism and Wildlife Cabinet Secretary Najib Balala said the modern facility will boost cruise ship tourism in the country.