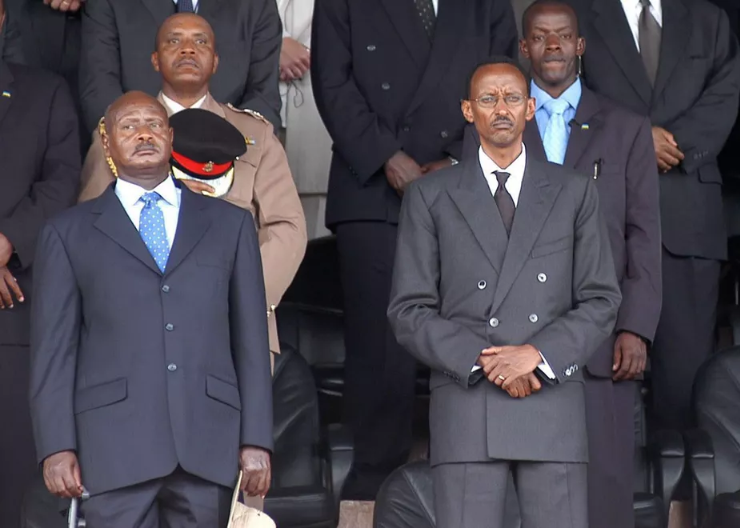 The verbal exchanges between presidents Paul Kagame of Rwanda and Yoweri Museveni of Uganda, between their ministers and between their media have been escalating. In the aftermath, borders remain closed and trade and movement of people has been disrupted.

Historically the presidents of Rwanda and Uganda – and their countries – have been close allies. Kagame was among the “originals” of the National Resistance Movement that started a rebellion in 1981 . He and many other Rwandan fighters contributed significantly to Museveni’s seizure of power in 1986. In return, Uganda gave crucial support to the Rwandan Patriotic Front during the civil war in Rwanda. Without it, Kagame would probably not have taken power in 1994.

Again, during the first Congo war in 1997 the two were close allies in support of the rebellion that toppled Mobutu Sese Seko and brought Laurent Kabila to power in 1997.

At the end of the 1990s things changed, and the unthinkable happened. The two friends clashed on several occasions during the second Congo war. They fell out against the background of political differences on how to handle the war. But just as important was the competition between the countries over the exploitation of Congolese natural resources.

Hundreds of their soldiers were killed in 1999 and 2000. The entente cordiale never fully recovered.

A semblance of peace was restored in the early 2000s, but only after Clare Short, the then UK Secretary of State for International Cooperation, summoned the two to London in 2001 to avoid all-out war between Rwanda and Uganda.

A new round of hostilities erupted in 2017. These escalated considerably in early 2019. The Ugandan leadership alleges that there are external efforts to topple the regime. In response, the Rwandan Foreign Minister has claimed that hundreds of Rwandans were illegally deported from Uganda and that many have been arrested and tortured. In early March, Ugandan nationals and vehicles were denied entry at Gatuna border post.

Although a military confrontation remains implausible, today’s situation is reminiscent of the worst days between the two neighbours. Leaders of the region need to do more to avert a violent scenario.

In February 2017 a Rwandan news agency, Rushyashya, which was considered to be close to the intelligence services, claimed that a Uganda-backed rebel force was being set up at a training camp to the west of Kampala. It was said to be put in place by the exiled opposition movement Rwanda National Congress with the support of a Rwandan businessman who fell out with Kagame and set up a large tobacco development investment in northern Uganda.

Things came to a head at the end of October, when nine people were arrested and charged in Uganda with conspiracy in the kidnap and illegal deportation to Rwanda of an exiled former military officer six years ago. Lieutenant Joël Mutabazi was sentenced to life imprisonment in Rwanda on several counts related to subversion.

Then in mid-December, the Ugandan intelligence detained a high ranking Rwanda Patriotic Front official for “alleged espionage and activities which threaten national security”.

There have also been other bones of contention. These include air traffic rights, priorities on the construction of the new standard gauge railway, energy projects and French support for the training of Ugandan military units.

A number of incidents showed that relations continued to deteriorate throughout 2018. In early January, a former operative of Uganda’s intelligence agency wrote to Museveni to claim that he had been offered US$100,000 by Rwandan agents to assassinate him. And Ugandan nationals claimed they were being arbitrarily sacked in Rwandan media, schools and banks.

For its part, Kigali again accused Kampala of illegally detaining and torturing its citizens and of harbouring dissidents intent on destabilising Rwanda. Suspected Rwandan agents fled Kampala because of a crackdown by Ugandan security forces.

Museveni and Kagame know each other very well. Nevertheless, the distrust between them is considerable. They both seem to genuinely believe that the other is bent on destabilising their respective regimes.

Earlier this month Kagame lashed out, claiming Uganda “had been undermining Rwanda since 1998”. He added that, faced with attempts to destabilise the country, “no one can bring me to my knees”. Museveni responded on the same day with a pointed warning:

Those who want to destabilise our country do not know our capacity. Once we mobilise, you can’t survive.

The Rwandan government has advised its citizens) not to travel to Uganda for safety reasons, and a week later effectively closed the border. This left hundreds of trucks stranded. Even ordinary Rwandans who used to go to Uganda for purchases, schools or medical care were prevented from crossing into Uganda. And to prevent them from using unofficial crossings, the Rwandan army destroyed makeshift bridges and arrested those attempting to pass.

Unconfirmed reports mentioned the deployment of Rwandan troops along the border. In mid-March, Ugandans started to shut down their businesses in Kigali because of a lack of supplies.

Where does this lead?

Both governments continue to trade accusations and take hostile unilateral actions. They aren’t even talking to one another directly to find solutions. In addition to impeding trade and the movement of people, the impasse is an obvious setback to cooperation and integration within the East African Community. Yet their neighbours Kenya and Tanzania remain silent.

Kenya’s president Uhuru Kenyatta met both Kagame and Museveni on the same day. But nothing concrete seems to have come from the bilateral talks. There’s been no follow-up. And no roadmap has emerged. Yet Kenyatta and Tanzanian President John Magufuli, as leaders of countries that control access to landlocked Uganda and Rwanda, have a powerful lever in their hands.

And if leaders of the East African Community prove unable to tackle this potentially destructive issue, then perhaps the African Union – which was chaired by Kagame until January – should take the lead.