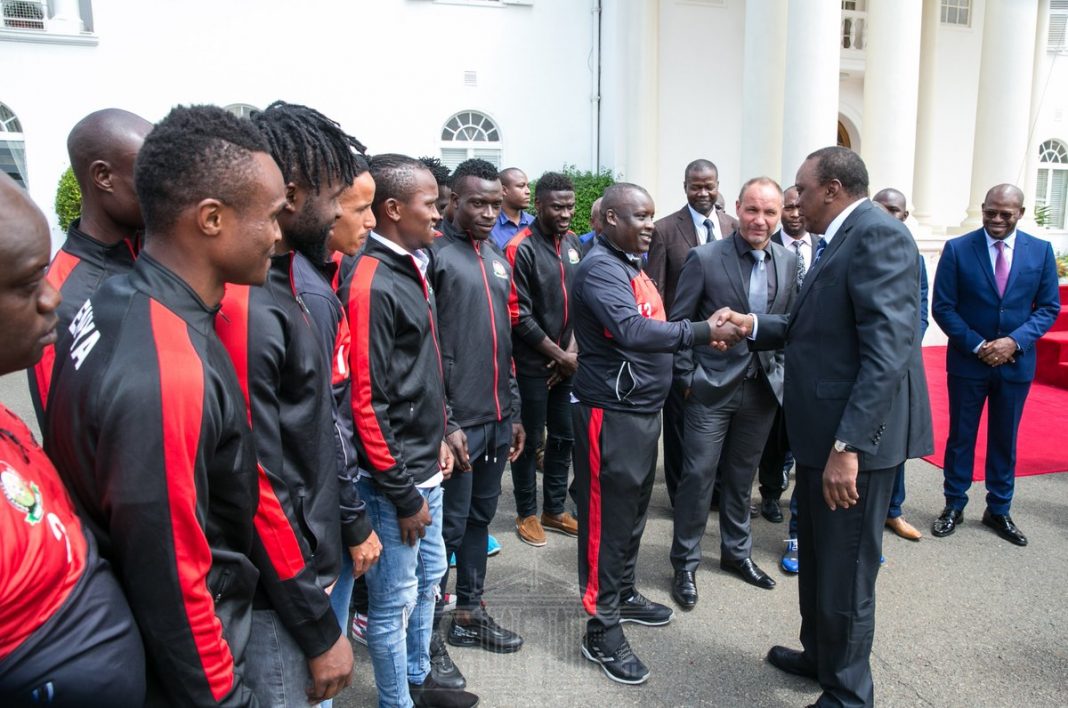 President Uhuru Kenyatta has today told Harambee Stars players to always be at their best and to ensure they represent the country well while in Egypt for the 2019 Africa Cup of Nations (AFCON) tournament.

The President spoke when he flagged off the team at State House, Nairobi ahead of the continental championships which will to be held  between June 21st and July 19th.

While handing the national flag to the team, President Kenyatta told the players and the technical team to be good ambassadors for the country even if they do not win the finals.

“It is not about winning but giving your best. That is the most important thing. You are out there flying the Kenyan flag,” said the President.

The team which leaves the country tonight, will be based at Marcoussis, south of Paris where they will pitch their training camp.

During their stay in France, Harambee Stars will play two friendly matches against Madagascar and DRC Congo before heading out to Cairo for the games.

It is the first time in 15 years that Harambee Stars is participating in the biannual event. The team was last at the championship in 2004.

“We endeavour to represent the country well. Thank you for your support,” said the coach who leads a 27-member team for the tournament in Egypt.

Fourteen of the players are already in Europe.

President Kenyatta assured the team of continued support saying Kenya’s comeback to the continental tournament  marks an important milestone for the country.

“A journey begins with a single step. The sports fund is the first step in ensuring that all our national teams are properly funded and supported,” said the President.

Kenya will play its first game against Algeria on June 23rd before facing neighbours Taifa Stars of Tanzania on June 27th followed by Senegal on July 1st.

Kenya’s qualification and participation in AFCON is a major milestone for the country whose sports profile is on the rise.

The Kenya Rugby Junior team has already qualified for the World Rugby Trophy slated for July in Brazil while “Malkia Strikers”, the National Women Volleyball team, recently qualified unbeaten for the 2019 Africa Games to be held in Rabat, Morocco.