Yesterday, Raila and his boys made a surprise visit to Nairobi’s Burma Market, for what Nairobi Senator Johnson Sakaja says is a lunch organised for Raila Odinga.

In light of his visit, many supporters came out to cheer the former NASA principle, prompting many to think that it was an organised political rally.

Burma market, mainly considered a Jubilee vote block openly welcomed the NASA squad, who was also accompanied by a section of Jubilee leaders, in spirit of the handshake.

This was the first time Raila addressed a crowd in Nairobi since the much praised handshake between him and his arch political rival Uhuru Kenyatta. 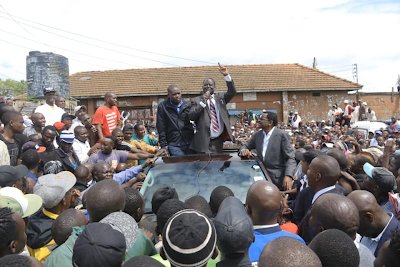 Individuals close to Raila said that leaders should know that despite shaming him, “Raila is still the apple of many kenyans across the country, and leaders should tread tread carefully when insulting him”

However, Nairobi Women Rep. Esther Passaris was not pleased with the visit, claiming that she and fellow women leaders were not invited.

She however championed the public efforts to unite the country, and added that women too should be involved in the agenda