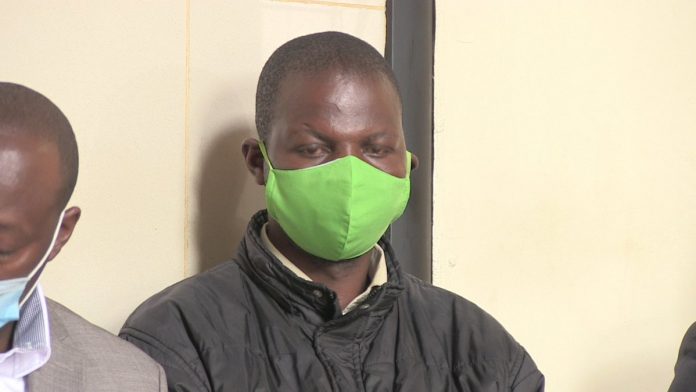 Edgar Mokamba, an administration police officer based at Nyari police patrol base in Westlands sub county, Nairobi county is seeking for plea bargaining for his murder charges to be reduced to that of man slaughter. – By Meshack Makau.

Addresing the media today morning, his lawyer Danstan Omari said that they are intending to enter into plea bargaining with the DPP.

“The accused person did not shoot intentionally to kill. His gun discharged ten bullets, my client if profusely apologizing to the citizens of this country for not being very careful while handling his gun. The deceased was his personal friend for many years. He had no intensions of killing him. We will be imploring the DPP if he finds our story correct we are intending to write to the DPP for a request to enter into plea bargaining with a view of the offense being reduced into man slaughter, he pleads guilty and therefore we mitigate for his lenient sentence,” said Omari.

On that fateful day, the accused was on duty assigned to take care at the gate at Nyari police patrol base when the deceased later joint him.

It was said that the two were having some miraa in the deceased’s car when a lady with a Somalian ascend and origin made her way into the police post.

“At around 9:30 PM a suspicious looking woman walked into the police post. The accused person alighted from the car and asked the person to identify herself. The accused person called his boss who came running plus other officers and took possession of the lady,” added Omari.

According to Mr. Omari, the lady looked like a terrorist and tension was high. That meant that Mr. Edgar had already charged his gun and was ready for combat.

“There was fear that the lady might have been a terrorist, she was a Somali by ascend and physical appearance so the accused had already charged and ready for combat. As he was returning back to the car he accidentally touched the trigger and the type of gun he was using is the type of the gun that discharges those bullets without him touching the trigger every other time the bullets are being discharged,” expressed Omari.

It’s being alleged that the bullets hit the ground and accidentally hit the diseased inside the car. The deceased was shot on the head.

The state had requested that the accused be detained and produced to court today to allow for the conclusion of the investigations.

The accused was also to be taken to Mathare Hospital for a psychiatrist test. The test was not conducted because the hospital is closed until January 11, 2020.

Appearing before deputy registrar today in Milimani Law courts, the state requested for more days to complete the process but the request was declined.

The registrar insisted that the accused must be charged and ordered that he be presented to the high court tomorrow.

“Tomorrow the accused will be arraigned in court with the offence of murder. As the defense team we are very clear that the accused person did not shoot intentionally to kill. The accused person is remorseful and asks for forgiveness from the whole public ,” concluded Mr. Omari.