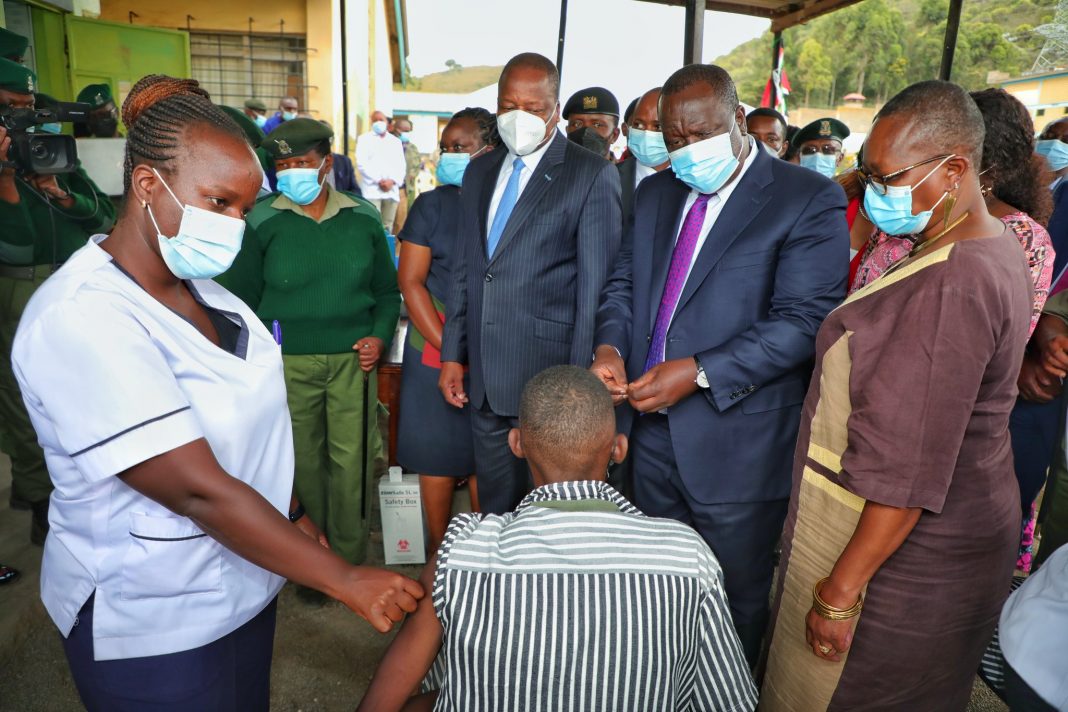 The Government Tuesday launched a Covid-19 mass vaccination drive targeting inmates and officers in the prisons industry across the country.

The five-day exercise that targets 133 correctional facilities across the country was flagged off by Interior Cabinet Secretary, Fred Matiang’i, and his Health counterpart Mutahi Kagwe at the Naivasha Maximum GK Prison.

Matiang’i said all service members will receive jabs by Friday this week to pave the way for the resumption of family visits that were suspended in April 2020.

“We have more enough doses for this purpose. The Ministry of Health has availed more than 100,000 doses, and our plan is to ensure the prison population is protected, not only as a matter of government policy but also because it is a human right.”

The CS said the prisons industry has recorded over 91 percent recoveries of Covid patients since the onset of the pandemic.

He attributed the success to timely interventions by prison authorities and support from donors and international partners.

“When the first Covid-19 case was reported in the country, our greatest fear was for the correctional facilities. Since then, we have lost a few of our officers and inmates, but it could have been worse without the level of management and support we have received from the Ministry of Health and our development partners,” he said.

The CS assured the prison population that the vaccines are safe and urged them to disregard the myths peddled about the jabs.

“You didn’t come here to die. This is a correctional and rehabilitation facility. You are respected just like all other Kenyans and we must protect your lives. Our intention is to protect you and safeguard your welfare even as you spend time here.”

According to the American Medical Association, incarcerated people are five times more likely to contract the coronavirus relative to the national rate. This makes cells, remand centers, and prisons high-risk areas, a situation aggravated by overcrowding and close interaction between individuals in these facilities.

Last year, the government suspended all visits to prison lines, Borstal institutions, and youth corrective training centers as part of the mitigation measures against the spread of Covid 19.

So far, the Kenya Prisons Service (KPS), in consultations with the Judiciary and the National Council on Administration of Justice (NCAJ), has also released 6,220 remandees and convicts in an effort to decongest correctional institutions.

All those released are petty offenders who have already served the entirety of their respective jail terms; inmates whose sentences were revised by High Courts, and those freed after their bail/bond terms were reviewed by Magistrates Courts across the country. The program has yielded a 3 percent reduction in the prison population.

Other contingency measures put in place to protect the prison population were the establishment of quarantine centers for newly admitted inmates, isolation rooms for confirmed cases, and a Public Health Emergency Operations Centre for coordination of response efforts in the prisons industry.

The Judiciary has also been holding the virtual court system through Skype and Zoom significantly reducing the risk of contamination and infection.

Matiang’i later restated the commitment to streamline operations within the prisons industry and announced that the Ministry will pump an additional Sh200 million into the enhancement of the Department’s industrials capacity.

The money has been generated from the Prisons Enterprise.