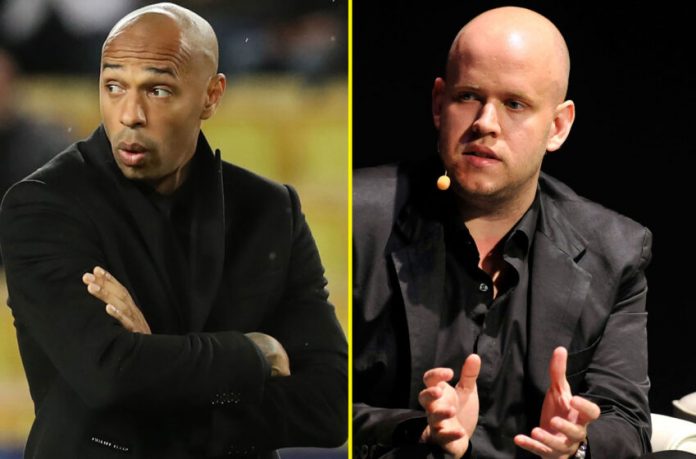 And now Henry, 43, has confirmed he is part of the Swede’s consortium as he revealed the group’s vision for the future at the Emirates.

When asked if he was part of the potential takeover team, Henry – speaking on Sky Sports’ Monday Night Football – said: “It is true.

“He approached us, we listened to him. And we knew, first and foremost, that he wanted to involve the fans.”

Henry continued by revealing not only does Ek, 38, want to involve the fans in a bid to bring back the ‘Arsenal DNA’ but he has already got the money in place.

The French idol added: “He wants to re-inject the Arsenal DNA, the identity that I think is long gone.

“They don’t have a lot of Arsenal people among the board who can show the right direction, and that’s what Daniel wants to do.

“He already reached out and said himself that he has collected the funds to put in a good bid.

“We are trying to offer a solution, involving the fans and the DNA back at the club.”

Henry continued by saying Ek will bring a superb blend of marketing know-how AND passionate fandom to the club should his takeover plot be successful.

The former striker even said Ek would never have allowed Arsenal to have become embroiled in the failed, controversial European Super League plot which has sparked wild fan protests.

Henry added: “As a marketing guy, you can see what [Ek] did with his company.

“But, more importantly, he is a fan. He wants to make sure that the team can be what it used to be.

“That is what he wants to bring, and what we want to bring – the identity and the DNA of the club back, and people who care about the club.

“If you had fans on board, this European Super League thing would never had happened.”

Despite fan pressure, current Arsenal owner Stan Kroenke has publicly insisted he will ‘not sell any stake in the club’.

And Henry warned supporters – who protested against Kroenke last week – not to get too ahead of themselves as the takeover process could go on for a ‘very long time’.

He said: “The takeover is going to be a long, and not easy. “And Daniel will not move away, he will be there waiting to see if they want to sell. “That’s going to take a very long time.

“We know what we want to do but, first and foremost, we need to make sure that we take over, if they are listening.”

Henry finished by saying Ek will be ‘honest’ and ‘transparent’ with fans – and has already held talks with the Arsenal Supporters’ Trust. The Frenchman concluded: “Daniel is an honest man, transparent.

“Fans want to know what might happen at their club.

“We had a discussion with the Arsenal Supporters’ Trust and he was very open with them and he wants to be open.

“He wants to buy the club, he reached out, and there is going to be a bid.

“If I wasn’t part of the bid, I would have backed it up from afar.

“Because I want the club to be run a bit better and the fans to be involved.

“And the fans are not happy about it.”