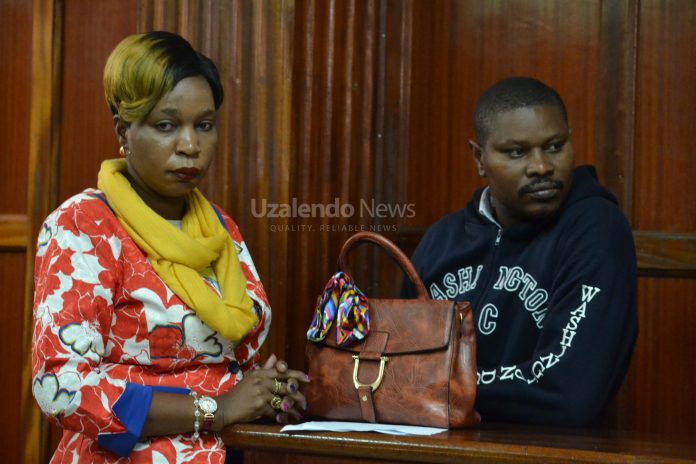 Two people have been charged with making national identity cards without lawful authority so as acquire insurance covers fraudulently.

They are alleged to have committed the offence on 13th June 2018 at an unknown place in Kenya.

Peter Mwaniki Wanjiku faces three counts of uttering a false document.He is accused of knowingly and fraudulently uttering a forged National identity card no.24960144 in the names of Evans Karanja mwangi to Judith Atieno Odhengo purporting it to be a genuine identity card issued by the National Registration Bureau.

He is alleged to have commited the the offence on 13th June, 2018 at ICEA LION life assurance company offices in Thika town within Kiambu county.

He is accused of uttering the same identity card of Evans Karanja Mwangi at APA insurance Limited offices at Apollo Centre in Westlands Nairobi to one Gibson Okola Etindi purporting it to be a genuine ID issued by National Registration Bureau for the purpose of fraudulently acquiring a personal accident cover.

On 18th June, 2018 at Britam General Insurance Company offices in Thika town, Peter is accused of uttering the forged identity card in the names of Evans Karanja Mwangi to Evalyn Kageni Njiru,purpoting to be a genuine ID vcard issued by the National Registration Bureau  for the purpose of fraudulenly acquiring a personal accident policy cover.

He is also accused of falsely presenting himself as Evans Karanja Mwangi to Gibson Okola Etindi, a business service team leader at the said APA Insurance Limited and Evalyn Kageni Njiru, a financial advisor at the Britam Ge4eneral insurance company limited.

Peter Mwaniki Wanjiku denied the charges before Chief Magistrate Martha Mutuku at the Milimani Law Courts. Emma wangari did not pled to the charges pending orders from Kiambu law courts on a case where she is expected to face attempted murder charges.

The complainant, Evans Karanja Mwangi said in court that his life is in danger and that the Second accused Emma Wangari has threatened his life severally. The IO in the case assured the court that they ensure the security of Evans.

According to sources who spoke to Uzalendo news on conditions of anonymity the second accused had a relationship with the said Evans Karanja which ended after discovering that the she had allegedly used his identity form acquiring life assurance policy cover in several insurance companies.

It is alleged that if Karanja had to pass away Emma would have walked away with a total of Ksh.35million from the life assurance covers taken in the name of Evans Karanja.

The case will be mentioned on 27th August, 2019 for the second accused person to take plea and setting of hearing dates.