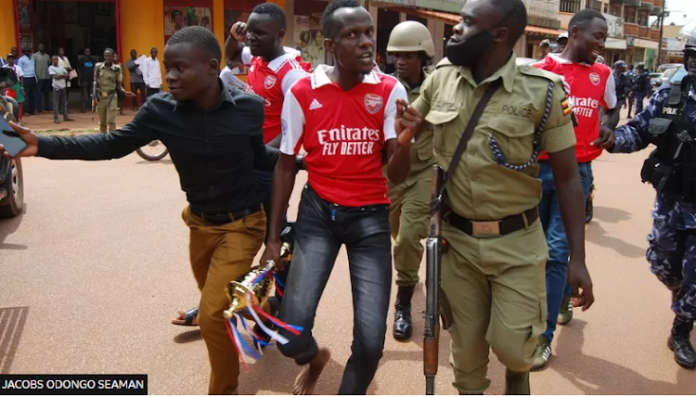 Seven of the eight Arsenal team supporters who were detained by Ugandan police for allegedly participating in unlawful processions have been released.

After hours in custody and with all accusations against the fans dismissed, they were freed on Tuesday night from Jinja’s streets, Uganda.

However, one of them will continue to be detained, according to the police, because of a prior robbery charge.

Their jubilation followed the club’s 3-2 English premier league victory over its adversary Manchester United on Sunday.

Before the supporters’ unconditional release, Kiira area Police spokesperson James Mubi reportedly warned them, according to the local media.

Defending the action taken by the police, Mubi told newsmen, “The focus is on the methodology they used, priority should be life first because what if a Manu fan or any person hits you and you get hurt or even die?”

The fans were reportedly traveling in a convoy of five vehicles on Monday morning when they were stopped by police while wearing the club’s shirts.

It was said that one of them was carrying a trophy.

Police said they were upholding the Public Order Management Act, which forbids the holding of processions without permission from the government, when they made the arrest, which drew criticism from all over the world.

The leaders of the fans acknowledged that by failing to request permission from the police, they had broken the law.

Read More  President Ruto: We Will Pursue Data Protection Regime That Is Pro-Transformation