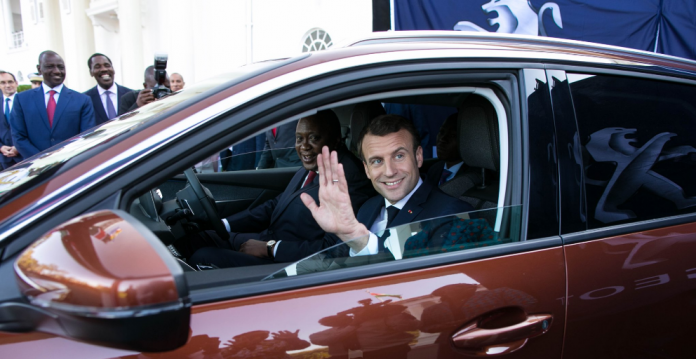 Addressing the press at State House, Nairobi, after unveiling the new model of Peugeot, President Kenyatta reiterated his call on all state entities to buy and use locally assembled vehicles and spare parts.

“This policy directive is intended to promote our agenda on manufacturing, creating good jobs for our people, and enhancing technology transfer to our country,” President Kenyatta said during the ceremony that was also attended by Deputy President William Ruto and several cabinet secretaries.

The President emphasized that as part of his administration’s efforts to build a better Kenya with shared prosperity for all under the Big 4 Agenda, manufacturing has been prioritized as one of the critical sectors for wealth and employment creation.

“As part of our agenda to promote manufacturing, my Administration is prioritizing motor vehicle assembly and manufacturing of spare parts,” President Kenyatta pointed out, saying that was the reason why the PSA Groupe, the second largest car manufacturer in Europe, was encouraged to set up their assembly plant in Kenya.

The 1600cc twin turbo SUV is one of Peugeot’s most advanced vehicle models assembled at the Kenya Vehicle Manufacturers (KVM) assembly plant in Thika.

President Kenyatta noted that the Peugeot 3008 is a high-performance vehicle with great fuel consumption and lowest emission in its class.

“It is also a hardy vehicle, having been tested in several parts of Kenya,” President Kenyatta said.

The assembling of Peugeot 3008 SUV commenced in September 2017. Two additional models, the Peugeot 2008 SUV and Peugeot 308SW, are envisaged to commence in April and September 2019.

By the end of this year, the PSA Groupe is expected to assemble at least 1,000 vehicles in Kenya, up from the current 480 vehicles.

President Kenyatta said it was encouraging to note that when the KVM plant is fully operational, the PSA Groupe hopes to assemble at least 15,000 vehicles annually in Kenya for both the local and regional markets.

President Macron assured that France is committed to working together with Kenya in several areas of mutual interest among them trade, investment, infrastructure, security and counter terrorism activities.

“We work very well together but we want to increase the cooperation with Kenya and the region from a security and defense point of view,” President Macron said.

“We do believe that our companies and our investors can be part of the growth strategy of your country by providing not just cars but employment in your country for your people,” President Macron added.

President Kenyatta praised the historic visit by President Macron, the first to Kenya by a French President.

“Mr. President, your visit signals our shared commitment to foster our bilateral relations and engagements within the region in various ways which will deepen, expand and strengthen our bonds of friendship and cooperation for the mutual benefit of our peoples,” President Kenyatta said.

The Kenyan leader observed that France continued to be one of the most important contributors to Kenya’s tourism sector and expressed optimism that the visit by President Macron will help increase the number of French tourists visiting Kenya.

President Macron is accompanied on his two-day state visit by a large group of businessmen and investors who will be meeting with some of the key government agencies and the private sector players in Kenya to explore opportunities for investment.

“This is good for Kenya and for our development. Today, France is our 17th largest trading partner; my expectation is that France will grow into an even more important trading partner for Kenya as a result of this visit,” President Kenyatta said.

Earlier, President Macron was accorded an elaborate state reception complete with a 21-gun salute when he arrived at State House, Nairobi, on the historic visit geared towards boosting Kenya-France cooperation.

The 21-gun salute, a ceremony reserved for Heads of State and Government, was followed by the national anthems of Kenya and France played by the Kenya Army band.

Thereafter, President Macron inspected a colourful guard of honour mounted by a detachment of the Kenya Army before joining President Kenyatta for a tête-à-tête that was followed by bilateral talks.

The bilateral talks culminated in the signing of the Partnership Agreement on Promotion and Exchange of Skills and Talents, and the Agreement on the Roadmap on University, Innovation, Research and Professional Training.