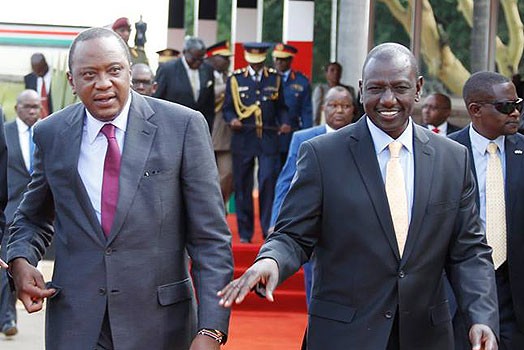 The recent vent by President Kenyatta on Tanga Tanga leaning MPs from Central Kenya has brought to the fore the widening gap within top Jubilee echelons.

It is now clear that the President has developed cold feet on the promised support to DP William Ruto.

During their highly publicised political marriage in 2012, the President promised to back Ruto has his retirement comes in 2022.
President Uhuru did the same in 2017.

As prove of their tight political ties, Uhuru gave Ruto alot of leeway in the running of the government between 2013 and early 2018.

Ruto literally called the shots in Government and his word was law.
So powerful was Ruto during this period that even people earlier very close to Uhuru had to see Ruto to get things moving…or even access the President.

During Presidential functions, Ruto was the defecto MC…to iron out small and big logistical challenges.

Things started going South for Ruto after the elections. First the Predident executed a major surgery in his cabinet…initially appointing Dr.Fred Matiangi.

Then there was the clear out of powerful people from State House perceived to have links with Ruto.

It is imperative that during the cabinet purge the President appointed George Kinoti and nominated Noordin Haji as Director of Public Prosecutions.

Majority of these had close links to the DPs office.
Then the handshake came. Ruto and Raila Odinga have never seen eye to eye since Rutos ICC tribulations.

Rutos supporters allege that Raila had an hand in the indictment of Ruto. And for good reason. Raila as closest Presidential loser to Kibaki bore the biggest responsibility and should have been a person of interest to ICC…alongside Mwai Kibaki.

Since the handshake, the DP political crisis worsens by the day.
As the defecto deputy to Uhuru, he cannot directly confront the President over the humiliation he lately receives.

So he has to let his foot soldiers take the rabid dog duty of barking at the President.
The deputy has to clap even when the President casts aspertions on his 2022 bid for the President.

During the famous rank by the President during the Wakorino day, Ruto applauded ever as Uhuru tore into his allies, terming them dishonest.

Raila has personalised his attacks on Ruto, accusing him of donating graft cash in churches. The Raila narrative points to his real intentions of succeeding Uhuru.

It now appears that Uhuru is considering withdrawing his support for Ruto by backing Raila for the big seat.
Ruto is not a political fool and may have seen through the political maths as they unfold.
This explains why he has been going it alone in Central in a bid to create his own fan base devoid of Uhuru.