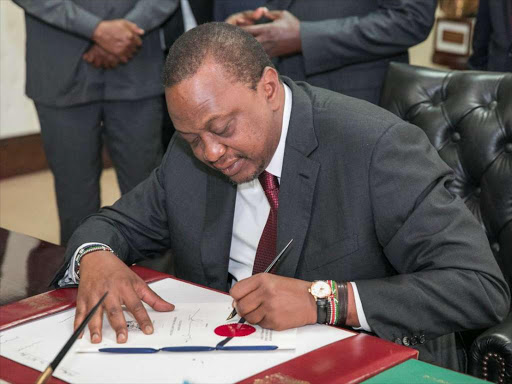 President Uhuru Kenyatta has this evening signed into law the Supplementary Appropriation Bill to release funds for Government expenditure for the financial year that is ending June 30.

The law mandates the National Treasury to release Shs 161 billion from the Consolidated Fund  to various Government departments. The funds are categorised into recurrent expenditure which totals to Shs 107.5  billion and development expenditure that totals to Sh53.7 billion respectively.

The Appropriation Act authorises among other things the release of Shs 8 billion for settlement of  pending Government bills. The allocations for pending bills is aimed at effecting the payments to traders who have provided services to the Government in line with the recent directive by President Kenyatta.

The law the President signed also reflects the continuation of the austerity measures that were entrenched at the beginning of the financial year that is closing.

The austerity measures are reflected in the reduction of Government expenditure by Shs 58 billion, which was slashed from various departments.

The State Department of Infrastructure was allocated Shs16.6 billion while the Ministry of Water and Sanitation will receive Shs 11.8 billion for development.