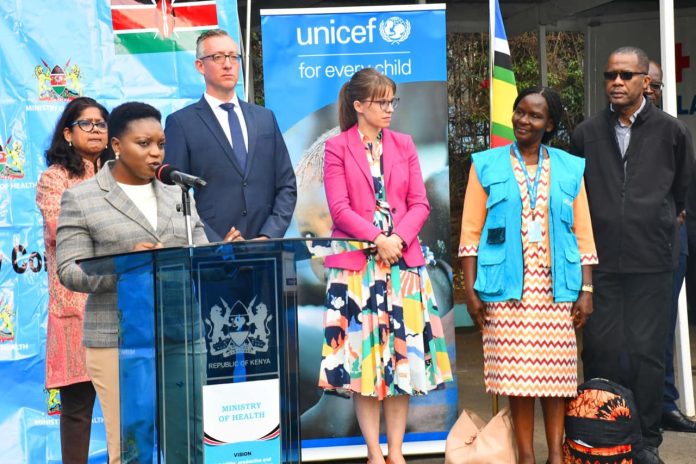 Seventeen people and close to two thousand have died or are infected by cholera respectively.

In relation to this, the cabinet secretary for Health Dr. Nakhumicha S. Wafula flagged off four trucks of assorted health, water, sanitation and hygiene supplies.

The supplies which were donated by UNICEF, Germany embassy and other partners will go along way in mitigating the severe effects of drought that has affected 23 counties and rendered more than 600,000 children with severe malnutrition.

The supplies will also help in containment of the cholera outbreak that has so far been recorded in more than 6 counties.

Speaking at a press conference the CS thanked UNICEF for efficiently embarking on the exercise to stop the spread of the disease.

The cholera outbreak has been blamed on the prevailing drought situation in the country occasioned by climate change.

Dr. Patrick Amoth, Director General of the Ministry of Health, stated that starvation has struck the counties of Isiolo, Mandera, and Garissa, and that medical equipment is being dispatched to the counties to treat malnutrition.

According to Dr. Amoth, cholera is spreading fast as people get water from contaminated sources due to the existing drought.

The humanitarian aid is being coordinated by the Ministry of Arid and Semi-Arid Lands whose CS Rebecca Miano says they work closely with the ministry of health.

CS Miano also thanked the Germany government and UNICEF stating that the majority of the affected Kenyans reside in the ASALs counties.

Germany to Partner With Kenya to Increase Quality Health Care