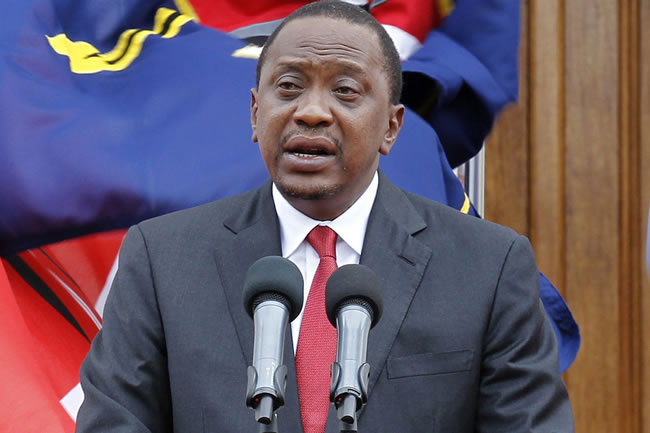 President Uhuru Kenyatta has assured that he will not relent in the war against corruption.

The President emphasized that no effort will be spared in ensuring that the vice that has been choking the country’s economy is completely destroyed.

“We will remain focused in the fight against corruption. We hope that every institution will play its part to make this war successful,” President Kenyatta said.

The President commended the two envoys for strengthening relations between Kenya and their respective jurisdictions during their tour of duty.

President Kenyatta said Kenya appreciates EU’s partnership which has promoted development adding that he looks forward to more collaboration as the country explores the blue economy as an emerging frontier for wealth and employment creation.

In the meeting with the outgoing British High Commissioner, the President noted that the UK remains one of Kenya’s biggest trade partners.

“We hope to continue with the journey we began on empowering the youth through small and medium enterprises,” the President told the outgoing British High Commissioner.

The outgoing EU envoy encouraged President Kenyatta not to loosen his grip in the fight against graft saying this will restore Kenya’s dignity and entrench its position as a thriving and progressive economy in Africa.

On his part, High Commissioner Hailey commended the President for the commitment he has shown in combating the vice where even senior government officials have not been spared.

The outgoing British High Commissioner assured President Kenyatta that trade between the two countries will continue to grow whether or not there is a BREXIT deal.

Earlier at State House, Nairobi, President Kenyatta received credentials from incoming Japanese Ambassador to Kenya Ryoichi Horie who pledged to take the bilateral relations between Kenya and Japan to new levels of success.

Ambassador Horie said during his tour of duty in Kenya he will work tirelessly towards enhancing the close ties that have existed between his country and Kenya since 1963.

“I will devote all my energy towards strengthening the existing relationship between Kenya and Japan that is founded on our shared values and goals for the purpose of development,” Ambassador Horie told the President.

The new Japanese Ambassador to Kenya pointed out that as a testimony of the close ties between the two countries, Kenya hosted the Sixth Tokyo International Conference on African Development (TICAD-VI) Summit in August 2016. This made Kenya the first African country to ever host a TICAD Summit since its inception in 1993.

President Kenyatta welcomed the new envoy and assured of his administration’s commitment to working closely with him to boost the existing cooperation and partnership between Kenya and Japan.

“Welcome to Kenya. I look forward to working with you to expand our areas of partnership for the mutual benefit of the people of Kenya and Japan,” President Kenyatta said.

President Kenyatta acknowledged Japan as one of Kenya’s key development partners whose cooperation has played a big role in the country’s development.