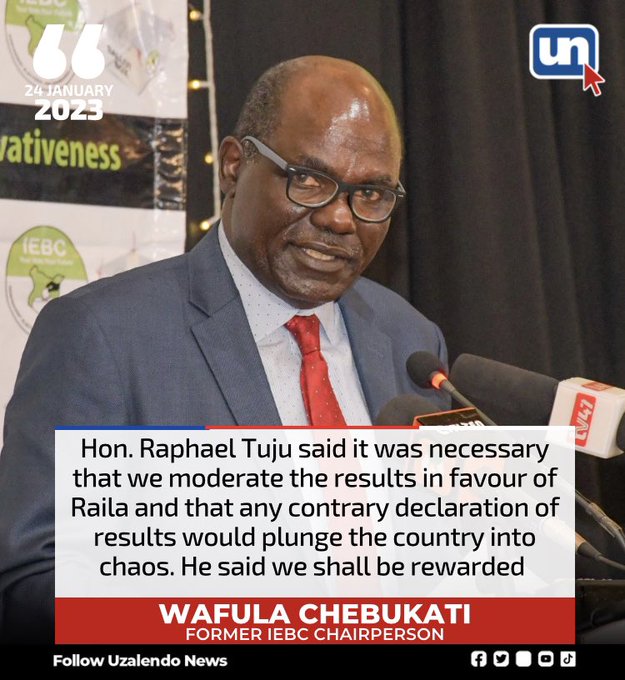 Former IEBC chairman Wafula Chebukati now claims that Azimio la Umoja – One Kenya party Executive Director Raphael Tuju and two others came to his office at 3 am while presidential vote counting was underway and offered him a bribe to change the 2022 Presidential election results in favour of Azimio leader Raila Odinga or force a run-off.

Chebukati testified before the tribunal led by Justice Aggrey Muchelule on Tuesday that on August 15, 2022, a team of three visitors walked into the holding room in Bomas at 3 a.m., where he was taking a nap, and demanded an audience with him.

“I got information from my security detail and members of staff that there are gentlemen who want to see me. They walked in uninvited as I was in the holding room. I actually told my CEO that I would take a nap for one hour and was woken up by these men,” he narrated.

He added that he immediately summoned all the IEBC commissioners before holding further discussions with the three.

“They introduced the purpose of the visit that they wanted to discuss about the tallying process and I told them if that’s the case I would have to invite all the commissioners to discuss,” he said.

Chebukati said he called the other commissioners into the room to listen in as the matter they were to discuss also involved them.

“The commissioners were on the floor of the auditorium and it took them only a minute or two for them to join us.”

The IEBC chairperson further narrated that Tuju told him that the results should be moderated in favour of Raila.

“The first speaker was Amos Wako who said that we should not operate in a vacuum and we should look at the bigger picture for the country and when you reach this kind of situation you can moderate results and achieve stability of the country,” said Chebukati.

“Tuju said that it was necessary that we moderate these results in favor of Baba and that any contrary declaration of the results would plunge the country into chaos. I understood Baba to be Raila Odinga,” he added.

“He said that in the alternative, if it was not possible to moderate the results, we should ensure a runoff. Tuju said that if we consider the request then we shall be rewarded. We did not encourage him to expound the reward.”

When commissioner Irene Masit, who is on trial, supported the proposal, the ex-IEBC chairman said he opened the floor for the commissioners to speak up.

Chebukati claimed that he disagreed with Masit and that they should abide by the oath of office.

“Commissioner Masit agreed with the remarks of Senator Wako and Tuju. That we should moderate the results. I said that the will of the people must be respected and live up to the oath of office.”