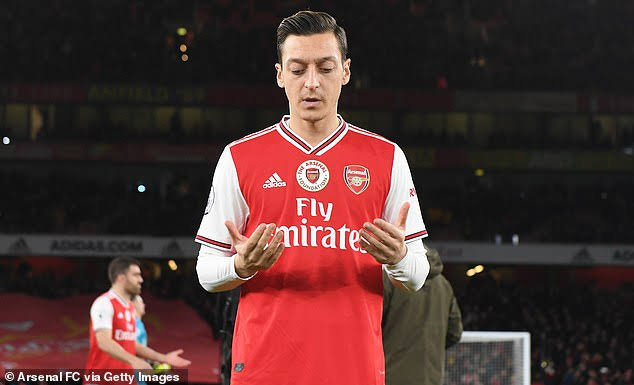 China’s Foreign Ministry has come out to deny Mesut Ozil’s allegations after the Arsenal star came out in support of Uighur Muslims.

Ozil condemned the alleged religious and ethnic persecution of minority groups. While China has consistently denied all accusations of mistreatment of Uighurs.

Human Rights groups have claimed that a million people have been detained without trial in labor camps, leading to Ozil’s comments last week: “East Turkistan, the bleeding wound of the Ummah, resisting against the persecutors trying to separate them from their religion.

“But Muslims are silent. They won’t make a noise. They have abandoned them. Don’t they know that giving consent for persecution is persecution itself?”

The Chinese Foreign Ministry spokesman Geng Shuang has now come out to condemn Ozil and his beliefs.

“I don’t know if Mr. Ozil has ever been to Xinjiang personally but he’s been completely deceived by fake news and false statements have influenced his judgment,” Shuang said.

He then moved to invite Mesut Ozil to visit Xinjiang province in order to confirm that no Muslim is mistreated.

“We also welcome Mr. Ozil to come to Xinjiang if he has the chance, to take a walk and look around, as long as he has a conscience, is able to distinguish right from wrong and uphold the principles of objectivity and fairness, he will see a different Xinjiang.”

Too Risky: Sports committee backs suspension of the Tokyo Olympics

Families receive remains of their loved ones 7 months after Ethiopian...

Debunking myths about the impact of elephants on large trees