What an electrifying English Premier League we had over a weekend when Kenyans were forced by ‘Matiang’i law’ to follow proceedings from the comfort of their homes (rather than in bars and other social places), for ease of enumeration as the 2019 census kicked off.

There were two absolute shockers of results, new Chelsea manager Frank Lampard finally has a win under his belt, a firm case for yet another two-horse race for the EPL title is already building up, one manager is under intense pressure, while the early race for the golden boot (scorer of most goals) has one unusual suspect.

Looks like all manner of (unwanted from Man United fans’ viewpoint) records are tumbling at the Theatre of Dreams (Old Trafford). Now, late (injury time) winning goals were a common occurrence during the 26-year reign of legendary Scotsman Sir Alex Ferguson, but on Saturday Ole Gunnar Solskjaer’s Man Utd were on the receiving end of a 93rd minute Patrick Van Aanholt strike, as lowly Crystal Palace stunned the 20-time English league champions 1-2.

For the second time in as many matches, a lethargic display and a missed penalty (this time Marcus Rashford the culprit) capped a largely lethargic display by the same team that wowed the Old Trafford crowd with ruthless counter-attacking display as they dismantled fellow top four competitors Chelsea 4-0 on the opening weekend.

Granted, Crystal Palace, without a win or a goal before this match were overly defensive and have an impressive away record, but pundits are now beginning to question Ole Gunnar Solskjaer’s tactical shrewdness; – why for example did he play with only one defensive midfielder (Scot McTominay, whom he replaced with Juan Mata in the 85 minute) leaving United exposed to Crystal Palace’s route one football and swift counter-attacks which led to both goals, despite dominating possession (71-29%, 22-5 total shots, 3-3 shots on target, 8-1 corners)? 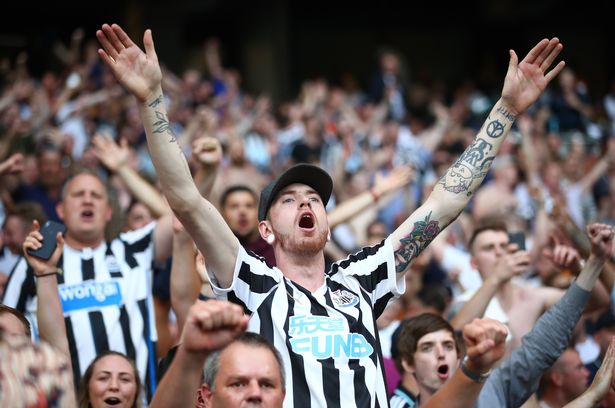 Come Sunday and another shocker, this time in London, at the new Tottenham Hotspur stadium to be specific. Straight from holding champions Manchester City 2-2 at their own stadium, Spurs were left ruing missed chances as Newcastle beat them 1-nil, with manager Mauricio Pochettino appearing to blame an ‘unsettled squad’ (star midfielder Christian Eriksen is thought to still ‘want out’ with the European transfer window still open) for the lackluster display, despite spurs boasting of a 79.8% ball possession. Just like for Man Utd, the win was new Newcastle manager Steve Bruce’s first of the season.

Over the weekend, what is emerging in these early days as the soft underbelly of the new EPL season reared its ugly head again. Marcus Rashford, who alongside Raheem Sterling (also a previous victim albeit under different circumstances), is seen as the future of English football, became the fourth black player to suffer racist abuse upon missing a penalty, after Chelsea’s Tammy Abraham, fellow Man Utd midfielder Paul Pogba and Reading’s (Championship club) Yekou Meite— begging the question; – has it suddenly become a crime for a black player to miss a penalty which is part and parcel of a football match anywhere in the world?

The affected players are however adamant the racist online taunts will not keep them down. Paul Pogba, his toddler in his arms and against the background of portraits of his late father Fassou Antoine Pogba and American civil rights activist Martin Luther King, posted this on his Instagram account on Sunday;

“My ancestors and my parents suffered for my generation to be free today, to work, to take the bus, to play football. Racist insults are ignorance and can only make me stronger and motivate me to fight for the next generation.”

Business as usual for Liverpool, City as they cruise out of the starting blocks 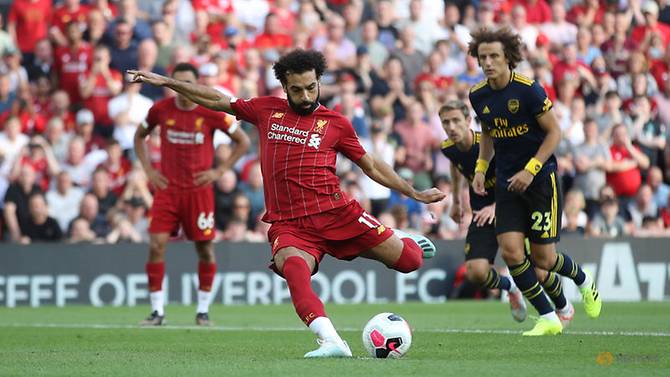 On Sunday, champions Manchester City won 3-1 at Bournemouth to move within two points of early pace-setters Liverpool who had walloped Arsenal by a similar margin 24 hours earlier. Raheem Sterling helped himself to a goal to take his season’s tally to 5, his goal sandwiched in between Sergio Aguero’s brace.

On Saturday, Liverpool had laid down the marker, beating Arsenal 3-1 at Anfield, thanks to a Joel Matip header and a brace from Mo Salah including a scintillating second where he paced all the way from the halfway line, leaving Arsenal’s new defensive acquisition (from Chelsea) David Luiz dead on his tracks… David Luiz had earlier on stupidly pulled Salah’s shirt, leading to the award of a penalty which Mo Salah cool-ly converted.

For Liverpool, the only (negative) talking point from the match was that their defense stalwart Virgil van Dijk appeared human for only the second time since he joined Liverpool in January 2018: – Arsenal’s new record signing Nicolas Pepe actually outsmarted VVD, becoming only the second player after Newcastle United’s Mikel Merino (in 2018) to successfully dribble past the 28-year-old Dutchman!

It might be early days, but judging from performances on the pitch and consistency, few would argue with the pre-season prediction by most EPL football experts, that 2019/20 will be a replica of the 2018/19 season; – with Liverpool and Manchester City the only two contenders for the Premier League title.

Leading the early race for the golden boot, are Raheem sterling with 5 goals and a certain Teemu Pukki of Norwich City, also on five. No one has ever scored more than 5 goals in the opening month of the season (August) but with City and Norwich each having a match left, to be played on Saturday August 31st, a new EPL record could be set by Raheem, Pukki, both or one other!

By the way, the little-known Norwich City striker, formerly of Celtic (Scotland) and Schalke (Germany), by scoring in the 3-2 defeat by Chelsea, became only the second player after ex-Fulham striker Pavel Pogrebnyak, to score 5 goals in his first three Premier League appearances! Kudos to him.

Frank Lampard’s start as Chelsea Manager had been humbling before Saturday’s 3-2 win away at Norwich City. He had suffered a heavy loss at Man United, a luckless home draw against Leicester and a penalty shootout loss to Liverpool in the UEFA Super Cup, played between the previous season’s winners of the UEFA Champions League and the Europa Cup. However his youthful team (Chelsea is currently under a 2-season EUFA ban on signing new players) turned up, Tammy Abraham (2) and Mason Mount on the score sheet as Chelsea narrowly edged out newly-promoted Norwich City.  Breathe easy, at least for now, Frank!

But, on the other end of League table after Match Day 3, one manager is already feeling the heat. The soft-spoken, amiable Javi Gracia, who took Watford to an impressive 8th – place finish last season, saw his side beaten 1-3 at home by West Ham United, the third defeat in a row after earlier losses to Brighton and Everton.

Watford, with zero points, is presently perched at the bottom of the EPL table and Javi Gracia is now the bookmaker’s favorite to become the first manager to be sacked this season.

The first international break of the new season takes after place next week’s action, so there will be no EPL football matches on the weekend of 7th-8th September. Live action returns to a screen near you on 14th September with Liverpool taking on Newcastle at Anfield, 2.30 pm.