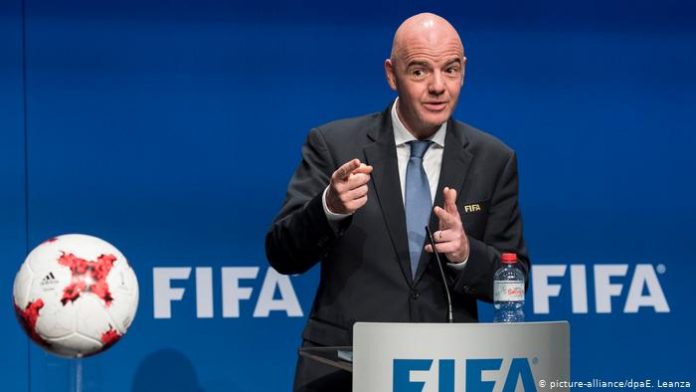 Fifa president Gianni Infantino has been cleared of violating the world governing body’s regulations after a preliminary investigation by its ethics committee.

Infantino is the subject of a criminal investigation over an alleged secret meeting with Swiss attorney general Michael Lauber. Both deny wrongdoing.

Fifa said documents shared by the Swiss courts were scrutinized.

“No aspect of the conduct analysed constitutes a violation,” it said.

“Some aspects do not even fall within the provisions of the Fifa code of ethics, or justify the adoption of any kind of measure, including that of a provisional suspension.”

Following reports appearing in several media sources since May 2020, the chairperson of the investigatory chamber of the independent Ethics Committee has initiated a preliminary investigation into certain allegations concerning the FIFA President, Gianni Infantino. In addition, on 21 June 2020, a complaint was filed against the FIFA President before the FIFA Ethics Committee concerning the same matter.

These sources made reference to several alleged breaches of the FIFA Code of Ethics, including the booking by FIFA of a private flight from Suriname to Geneva and meetings between the FIFA President with Michael Lauber, Attorney General of the Swiss Confederation.

In accordance with article 59 of the FIFA Code of Ethics, the chairperson of the investigatory chamber has opened a preliminary investigation on the basis of the allegations contained in the above-mentioned sources.

In particular, as the allegations are related to meetings between the FIFA President and the Swiss Attorney General which have since been made the subject of an investigation by a Swiss federal special prosecutor, Stefan Keller, all further relevant facts and materials available to the investigatory chamber of the independent Ethics Committee were also examined.

In this connection, access was granted to a copy of the decision of 29 July 2020 by the Swiss special prosecutor, as well as the various decisions of the Swiss Federal Criminal and Administrative Courts relating to the matter and the ruling of the Supervisory Authority for the Office of the Attorney General relating to Mr Lauber.

All of this material has been duly scrutinised by the chairperson of the investigatory chamber in the context of the preliminary investigation.

After examining the relevant documentation and evidence, the chairperson of the investigatory chamber has decided to file the complaint and close the case due to the evident lack of a prima facie case regarding any alleged breach of the FIFA Code of Ethics.

Based on the information available to date, no aspect of the conduct analysed constitutes a violation of the FIFA regulations – some aspects do not even fall within the provisions of the FIFA Code of Ethics, or justify the adoption of any kind of measure, including that of a provisional suspension.

Earlier in August, in a letter to member associations, Infantino said any meetings were “in no way secret and most certainly not illegal”.

However, the Swiss admitted the criminal investigation had already “caused considerable damage to Fifa as an organisation and to myself as its president”.

Infantino said the meetings with Lauber were broadly to discuss the fact the attorney general’s office was investigating a series of criminal allegations in which Fifa was a damaged party.

Neither Lauber nor Infantino have been able to recollect the specific details of their final meeting in 2017.