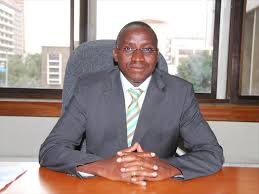 Ruto is mobilizing troops for a major battle with his boss, President Uhuru Kenyatta and Raila Odinga during the referendum campaigns slated for later this year. The Ukambani troops will fight out with Kalonzo, who will front the agenda of the BBI in Ukambani.

Over the weekend, Nyamai hosted more than 30 former Councillors from Kitui at an Embakasi hotel. Nyamai was first elected the Kitui West Mp in 2007 under the Charity Kaluki Ngilu led NARC Kenya party. Nyamai is a grassroots mobilizer who has kept in touch with Kitui professionals despite losing his seat in 2018.

He contested on a Wiper ticket. Nyamai will be among the leaders to take charge of DP Ruto campaigns in Ukambani. Then he defeated incumbent MP Nyiva Mwendwa and former minority leader in Parliament Francis Nyenze. Nyamai, a chartered Certified Public Accountant is an alumni of Alliance High School and the University of Nairobi. His peers at the University of Nairobi include Equity Bank owner Dr. James Mwangi and Kakamega Governor Wycliffe Oparanya.

He was instrumental in curving out Kitui Rural constituency to serve the interests of the marginalized and dry Yatta area from the dominance of Matinyani and Mutonguni. Ironically, he lost his seat to little known Ben Mwalika, who incidentally was backed by Governor Charity Kaluki Ngilu.

The reason for the Nyamai Ngilu fall out us not clear. Both leaders don’t see eye to eye. Ngilu is said to be gravitating towards Raila Odinga. Kalonzo has lately been building new alliances and is said to be building new alliances. Former Nairobi Deputy Govrrnor Jonathan Mueke abandoned the Kalonzo Musyoka Party last week. Others who have left the choice Ukambani party are former Machakos Mp Johnstone Muthama.