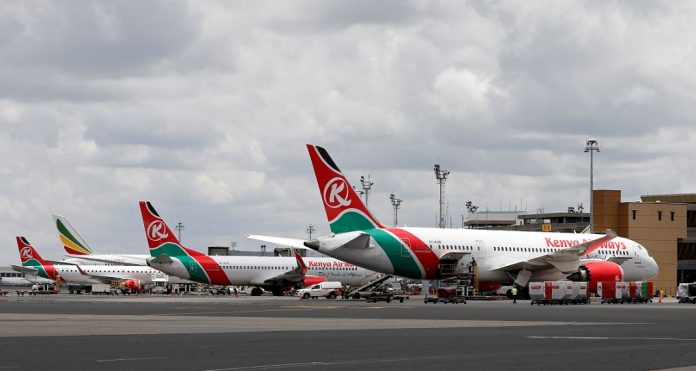 Redudancy woes facing Kenya Airways are being replicated in the United Kingdom. British Airways and its peers in Great Britain have petitioned respective Governments for bail our plans as the Covid 19 crisus bites hard. Kenya Airways has effected salary cuts among a raft of other measures to remain afloat.

In the UK, sectors supporting by the aviation industry are reeling under bankruptcy, forcing BA to engage the Govrrnment to remain afloat. The airlines are now demanding crisis talks in a memoranda signed by Mps and unions in the country. Britain is also in the process of exiting the European Union, worsening its bargaining position. Kenya Airways problems are more complicated but similar.

Its CEO Allan Kilavuka took an 80 per cent salary cut to cushion the airline from collapse. In the UK, stakeholders have petitioned for a task fofce to deal with Covid 19 crisis in the aviation sector. British Airways is among many airlines hit hard by the pandemic, with problems in the sector having a knock-on effect on other industries in Great Britain.

Kenya Airways existed before the Covid 19 crisis. The Government has initiated various measures to mitigate bankruptcy fears for the national carrier. There are legislative attempts to revert KQ fully to the Government of Kenya.

In Great Britain, the first ministers of the devolved nations such as Wales, Scotland and Ireland have called for “urgent” UK government intervention to help the struggling aerospace sector. Scotland’s Nicola Sturgeon, Mark Drakeford of Wales and Arlene Foster from Northern Ireland have signed a joint letter.

They believe a task force should be launched to help the industry, which has been hit hard by coronavirus. The BBC has asked the UK government for a response. The letter is also signed by leaders of the Unite union which brought the politicians together for the initiative.

Unite says tens of thousands of jobs in the sector and associated industries are on the “brink of being lost forever”. In May, MPs were told up to 8,000 jobs could go in the aerospace sector in Wales.

Scotland has also been hit hard with more than 1,200 jobs likely to go at companies such as Rolls Royce and GE Caledonian .
In Northern Ireland Bombardier , Collins Aerospace and Thompson Aero have announced plans to lay off more than 1,300 staff.