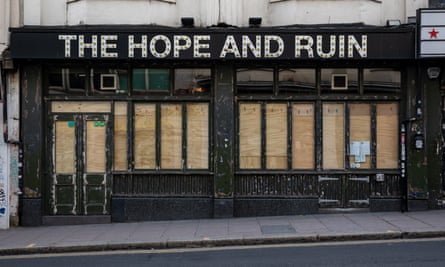 A resurgence of coronavirus has led the government to impose new restrictions on millions of people across the UK. For many restaurants, pubs and bars, the new rules have come just as business is picking up once again. “Another lockdown would be disastrous for our business,” the boss of a bar chain, Martin Wolstencroft, has said. “We’ve done so well to get through the national lockdown, we reopened on 4 July with measures in place, we rebuilt and it’s really frustrating.”

Mr Wolstencroft runs Arc Inspirations, which owns 17 bars and bar restaurants in Leeds, Manchester and Newcastle. Its Newcastle site is affected by the new restrictions announced on Friday, which require bars and pubs to shut between 22:00 and 05:00.
• Covid: New restrictions in North West, Midlands and West Yorkshire
• Restaurants at ‘critical risk’ of eviction
• Coronavirus: How are pubs keeping customers safe?

New rules limiting gatherings to six people have also impacted his business, leading to 3,000 bookings being cancelled at Arc Inspirations’ Manchester venues since the restriction came into effect a week ago.

Mr Wolstencroft is now really worried about Christmas – traditionally the busiest season of the year for the hospitality industry: “We were projecting our sales to be 20% down for the rest of the year without another lockdown. “But over Christmas, if there are more measures in place, we will be in excess of 50% down,” he says. We need that sales and profit which helps us through the rest of the year.”

He says many customers are struggling to understand the increased regulations, and the uncertainty is making things worse for hospitality firms. “It’s just very, very frustrating trying to manage a business when you don’t know what and when is going to happen in the future,” he says.

According to trade group UK Hospitality, the British hospitality sector is now “on a knife-edge”, and 1 million people employed in the industry remain at risk of losing their jobs.

“Despite the boost delivered by the Eat Out to Help Out scheme, consumer confidence is still low and it takes a further beating whenever lockdowns or restrictions are mentioned,” says UK Hospitality’s chief executive Kate Nicholls. “If lockdowns or restrictions are needed, they need to be formulated carefully, and come with government support, to minimise the damage to business.” She stresses that even having a hospitality venue close just an hour earlier “has a huge impact” on its business.

‘It makes no sense to close pubs again’

Peter Borg-Neal says the hospitality industry is being “picked on” by the government’s restrictions. Peter Borg-Neal is the chairman of Oakman Inns, a chain of 25 pubs and hotels spread across Hertfordshire, Buckinghamshire and Bedfordshire.
He doesn’t think that people socialising in restaurants and pubs is the main cause for the virus spreading, when “yesterday there were only nine cases in the entire county [Buckinghamshire], out of half a million people”.

According to data from real estate adviser Altus Group, the new curfew and restrictions of sales of food and drink to table service will affect one in 10 pubs in England. “If the government wants to enforce further rules than it needs to be very specific – if the individual pub or restaurant doesn’t comply, well close them,” Mr Borg-Neal said. “Don’t pick on the people who are working really hard to get the economy moving again, working really hard to protect their customers and their employees.”

Mr Borg-Neal wants the government to provide businesses with even more financial support if the hospitality industry has to be closed once again, or many will not survive. And he thinks a blanket policy to close restaurants, pubs and bars will have unintended consequences. “If they close all the pubs, what will happen? Students will be gathering in tiny flats and bedsits with a bottle of cider,” he stresses. “It will be far, far worse. It makes no sense on public health grounds to close pubs.”

While many hospitality firms are unhappy with the government’s restrictions, some are in favour of it, like The Steam Packet pub in Chiswick, London, which is owned by pub chain Brunning and Price. “We’ve suffered in terms of numbers as we’re a small pub, but people are coming back in because they feel safe,” pub manager Jonathan Gillespie tells the BBC. “We will follow the government’s regulations as they’ve made people feel safe.”

He is worried about the future, but says it is difficult to predict what will happen: “I am concerned about the impact it will have on my business but I don’t know what it will look like. Mr Gillespie says his business is good at finding solutions to difficult challenges, and will continue to do so. “Here we’re doing takeaway food and drinks from a hatch, you can buy fish and chips or a pint and take it to go sit by the river and socially distance,” he says. “That’s something that’s really helped our business.”