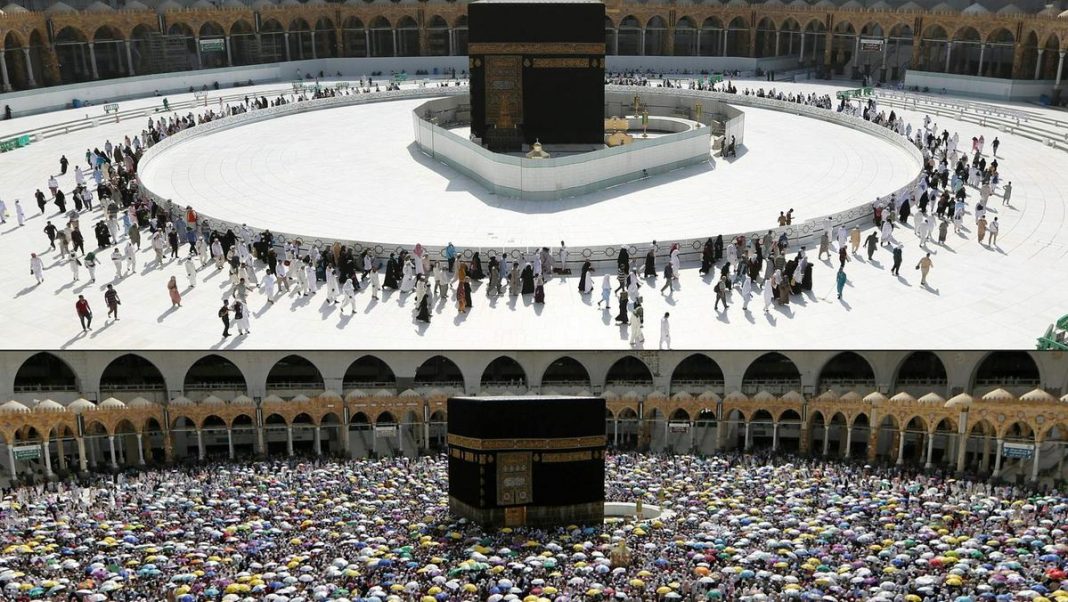 Saudi Arabia has finally clarified that due to the continuing COVID-19 pandemic only very limited numbers of local pilgrims will be allowed to perform Hajj in 2020. During the past decade, the kingdom has typically welcomed between 1.9 to 3.2 million pilgrims per year from across the Muslim world, generating more than US$8 billion in annual revenue for the Saudi economy.

No Hajjis from outside Saudi Arabia will be permitted to travel to Mecca in 2020 due to the high risk of infection. Managing crowds is normally a challenge during the pilgrimage. So, over the five days prescribed in the Islamic lunar calendar – which fall between July 28 and August 2 in 2020 – at most 10,000 Saudis and nationals from other countries resident in Saudi Arabia will perform the rituals. They must follow physical and social distancing protocols.

While the Hajj has been restricted and suspended in the past because of conflict or disease, 2020 is the first time Saudi Arabia – established in 1932 – has so significantly curtailed the pilgrimage.

Meanwhile, given huge drops in the current demand for oil due to the economic crisis provoked by COVID-19, the longer-term impact of the virus could deal a real blow to Saudi Arabia’s ambitions to diversify its economy by expanding pilgrimage-based tourism. It also highlights concerns about governance and regulation of the pilgrimage industry beyond the kingdom, raised in my own research mapping the challenges of the Hajj sector in the UK.

When the Saudis first took control of the Hijaz area of western Arabia – where Mecca is situated – in the 1920s, Hajj was the most significant source of revenue for the region. This financial dependence on Hajj ended in the years following the discovery of oil in the late 1930s.

As oil prices quintupled during the 1970s and international air travel became the norm, the Saudi rentier state increasingly deployed Hajj as part of its diplomacy beyond the Arab world. The House of Saud also demonstrated its largesse to the “guests of God” by expanding pilgrimage infrastructure as the number of overseas Hajjis expanded from 100,000 per year in the mid-1950s to nearly 1 million, 20 years later.

Into the 1990s, however, global recession began to focus Saudi attention on the benefits of systematically commercialising pilgrimage despite the challenges of rapid modernisation for safety, heritage and the environment.

Read more: Hajj: how globalisation transformed the market for pilgrimage to Mecca

The Saudi government has sought to offer pilgrims improved transport, accommodation, retail and other pilgrimage-related services by partnering with international private investors. During the past decade US$8.5 billion has been invested in the new King Abdulaziz International Airport in Jeddah and the Haramain high-speed railway, which connects Mecca and Medina to the new airport.

Even so, Vision 2030, launched in 2016 by Crown Prince Mohammed Bin Salman, represents a revolution in Saudi Arabia’s plans to open up the kingdom. Extremely ambitious targets were set to more than double current Hajj numbers to around 6 million a year – and Umrah to 30 million annually – by 2030.

In 2019, Umrah numbers reached 20 million with Saudi Arabia launching a new tourist e-visa the same year. Notably, single Muslim women can use this visa to complete the pilgrimage without the usual mahram (male relative). Umrah takes just half a day and it can easily be included in itineraries including the Red Sea coast and the ruins at Al-‘Ula.

Vision 2030 is especially focused on the global Muslim middle-classes with disposable incomes. As my own research showed, costs across the pilgrimage industry have been driven up by marketisation. Between 2013-18 the price of all packages had risen by around 25%. In 2018 even an “economy” Hajj package from the UK cost more than £4,000 (US$5,000).

Speaking on a Council of British Hajjis webinar in late June, an imam reminded disappointed pilgrims that Muslims are rewarded even for the religious intention of making Hajj.

But given the unprecedented late cancellation of millions of Hajj packages in 2020, business relations between suppliers and customers along transnational pilgrimage chains will undoubtedly be fraught for months – and possibly years.

Muslims worldwide are now wondering whether the 2021 pilgrimage will go ahead as before if they defer their package by a year. There is also a question about what quota each country will receive, if global demand doubles. And in many cases, travel insurance will not now cover COVID-19-related issues.

Even in Europe, where travellers are due refunds under EU law, cashflow problems mean that some Hajj travel agents are seeking to defer refunds until 2021. In the UK, some agencies have not issued the necessary certificates to pilgrims – which offer protection should providers go out of business – or have fraudulently advertised that they are covered.

The fallout of COVID-19 will magnify challenges that the Muslim pilgrimage industry was already confronting. The lack of professionalism and compliance among some Saudi-licensed Hajj organisers is exacerbated by inconsistent approaches to regulation and enforcement. What’s needed is more effective self-governance by the pilgrimage industry, as well as more transparent and better co-ordinated communication between pilgrims, travel companies as well as the Saudi and other authorities.

Seán McLoughlin, Professor of the Anthropology of Islam, University of Leeds