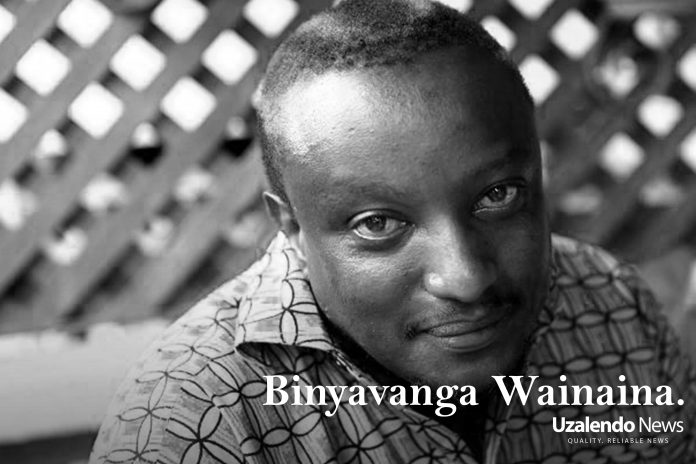 BY GERALD GEKARA – Binyavanga Wainaina is an award winning Kenyan writer who has bagged several awards since he ventured into his career as a journalist.

After completing his Creative writing studies, Wainaina kicked off his career as a food and travel writer in South Africa. His persistence creativity and hard work finally paid off when he proceeded to win the much coveted Caine Prize in 2002 for his outstanding book, Discovering Home. This led him to open up a forum, Kwani? (Sheng slang For What?) to nurture and promote local writers in east africa.

Since its inception, Kwani? has produced seasoned writers who have then come out to be ripe for every writing award platforms including Caine Prize. It is currently run by Kwani Trust

He then proceeded to being awarded for his exemplary writing by the Kenya Publishers Association, that resulted from his pieces in both local and international dailies; The East African, The Guardian and The New York Times, just to name a few.

In 2011, Wainaina openly admitted he was homosexual. His debut book, a memoir entitled One Day I Will Write About This Place, was published in 2011.

In January 2014, in response to a wave of anti-gay laws passed in Africa, Wainaina publicly announced that he was gay, first writing a short story that he described as a “lost chapter” of his 2011 memoir entitled “I am a Homosexual, Mum”.

Since them, Wainaina has been on the forefront for advocating for the LGBT community and leading activist in protecting their rights as human beings.

His departure on 21st May 2019, will forever be in the hearts of the seemingly oppressed gay community and several aspiring writers of East africa and the world.

We at Uzalendo News would like to send our condolences to the family and friends of Wainaina and hope that in these times of trouble theyt will find peace in knowing that Wainaina has left a positive mark in the Publishing world.