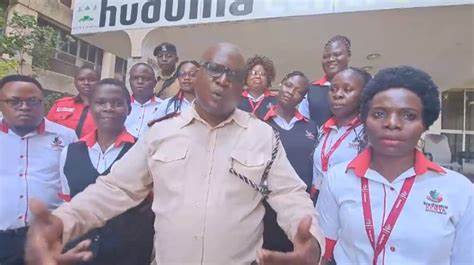 Mr. John Ogilo Migun, the Kisumu dancing chief, has been appointed to a new position in the government.

In addition to his role as an administrator, the 38-year-old Northern Sub Location assistant chief in Kisumu Central Sub-County has been chosen to market Huduma Kenya services.

Mr. Migun is seen in the video, which was shot at the entrance to Kisumu City’s Prosperity Building, educating the youth about the government services available at the Huduma Centre.

Mr. Migun, dressed in a Huduma Center-branded white shirt, is seen in the video urging the public to take advantage of the center’s extended hours in order to obtain the services they require.

At the end of the video, he performs his signature dance moves with the other eight Huduma Centre employees.

Neither Mr. Migun nor Kisumu County Commissioner Josephine Ouko confirmed the new position to the Nation. They, on the other hand, stated that they were awaiting communication from the President’s Office.