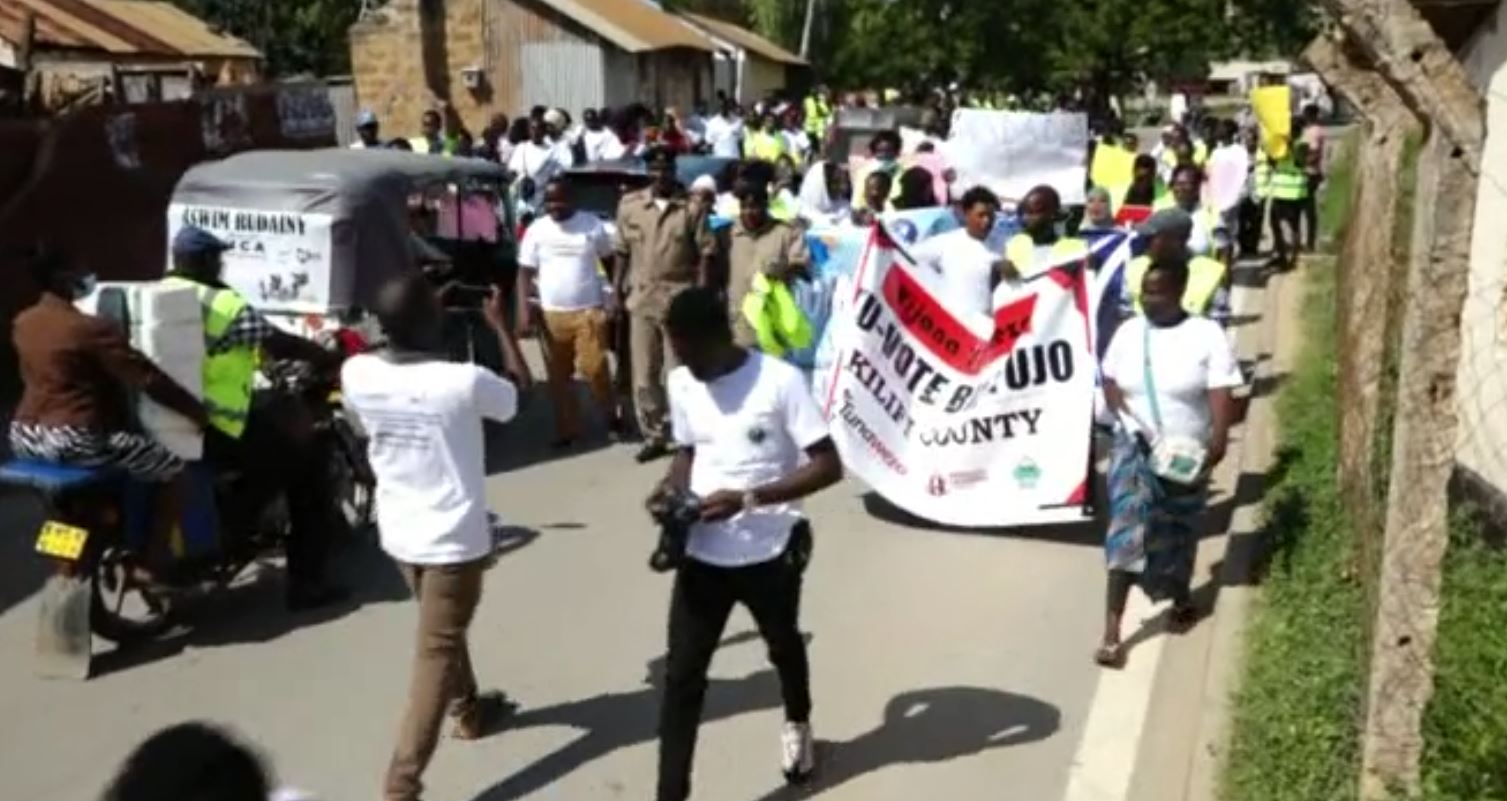 With only two days to the General Election, Civil Society organizations in Malindi have organized a peace walk in the town to sensitize members of the public on the importance of voting peacefully.

Wearing T-shirts, reflector jackets, and carrying banners and placards with messages of peace the CSOs marched from the Shella Assistant Chief’s office to the town center and other areas within the town to spread the message of peace during the elections.

The T-shirts had messages of USAID Act , Kenya Electoral Conflict mitigation and civic/voter education support Program, Kiongozi wangu Jukumu Langu at the back  ‘Muhurimtetezi wa haki while the reflector jackets bore the message of ‘Elections Bila Noma kataa Kutumiwa’ which loosely translates to “Elections without violence do not accept to be used’

The banners also had messages of ‘Vijana tunaweza Tu-Vote Bila Fujo Kilifi County Kudumisha Amani Ni wajibu wetu among others. Nicodemus Mwayele Senior Assistant Chief Shella who officially flagged off the walk said it brought together CSOs, Nyumba 10 elders, and Kazi Mtaani youths and the aim was to ensure Malindi remains peaceful during the elections.

“We want peace during the elections and even after the elections so that we live peacefully in our town,” he said. Mwayele said the government is hunting some politicians who are allegedly buying identity cards from voters.

“We are following up on the politician very closely because he is buying the Identity cards with an aim of destroying votes,” he said.

The Chief caled on youth to desist from being used by politicians to cause violence adding that the little money they are given could lead to bloodshed.

Nuru Salim an activist of peace from Malindi said as CSOs came together to sensitize the public on the importance of peace during these elections.“Most of the time it is us youth who are being used to cause violence that’s why we have come together as youth to sensitize others because it is our responsibility to vote peacefully,” she said.

Afitye Swale from Muslim For Human Rights (MUHURI) who is in the field coordinator said the peace walk was aimed at unf0orming people to vote peacefully so that peace prevails.
“The aim of this peace walk is to spread the message of peace to everyone so as to ensure we remain peacefully during and after the elections,” she said.

Helda Lameck a Gender-Based Activist from Malindi called on residents and all Kenyans to remain p[eaceul so as to live as brothers and sisters.

“Let’s Stop Fighting and vote peacefully we need each other and we shall remain brothers, sisters, and neighbors,” she said. Emmanuel Omondi Chairperson Malindi peace youth Network said peace is important every day that’s why as youth they are in the forefront in preaching peace.