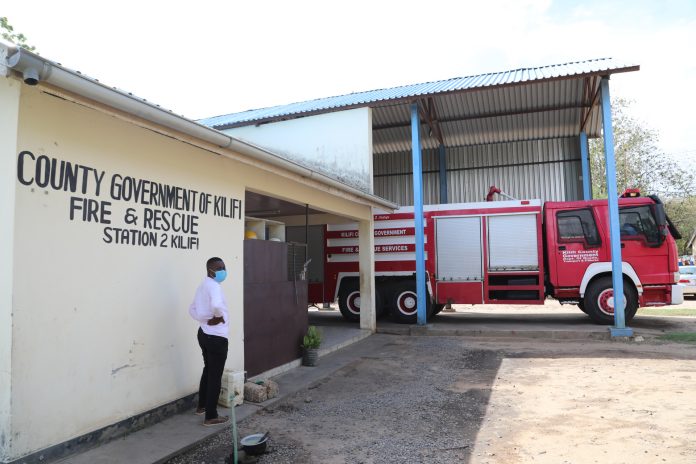 A fire station found within an estate in Kilifi town will have to be relocated to another area because of its locality. – By Ramadhan Kambi.

That is the current relocation plans by the Kilifi county government through a project which is funded by the World Bank (WB) jointly with the state department for housing.

The project shall be implemented by the Kilifi town municipality through the Kenya Urban Support Program.

The devolved government has already identified land which they described as safe for fire services as opposed to the current location which they called it a mere parking for the fire engine.

The ‘fire station is found in the middle of Ngala estate which belongs to the Ministry of national housing within the township.

Moses Gunda the Kilifi county Chief Officer in charge of housing, physical planning, and urban development said what they have in the housing estate was not a fire station but a parking area for a fire engine.

“We need training areas for this firefighters so that they are physically fit almost on a 24-hour basis, they need to be accommodated there which require a dining hall that cannot happen within a confined space but it can’t happen because it’s parking of the fire engine,’’ he said.

Mr Gunda said it is for that reason they opted to get a one-acre piece of land which can adequately accommodate all those facilities.

The chief officer said the facility is critical because of the only fire station available center in the county is in Malindi municipality.

” That project is what is being planned to be undertaken in the next cycle of the next Kenya urban support program, a particular site was identified within the outskirts of the CBD,’’ he said.

Already he said they got consultants on board who came up with the design of that particular station adding that within the next one week there would be a groundbreaking ceremony for the project.

Currently, he said Kilifi County has five fire engines and one of the engines is parked at one of their housing estates which is very inconveniencing.

The officer added that once the fire station is in place the county government intends to acquire more fire engines.

“This fire station will be able to cover key areas from Kilifi north to south, Rabai and Mariakani areas rather than relying on what has been there, the fire engine has to come from Malindi, so for us it’s one project which we believe will improve in terms of safety,’’ he said.

Locals living within the estate who were interviewed said the fire station should be relocated immediately because it is inconveniencing their lives.

One of the Ngala Estate residents Rose Riziki said those staying near the ‘fire station don’t feel comfortable as such a facility is supposed to be away from the estate.

“We would like to see this fire engine relocated to a specific area, since they came here, we have no problem with them they are good people the environment here is not conducive for them, “she said.

She said normally they practice openly and at times children flock to the area to watch them as they do their exercises.

At one time she said a woman delivered prematurely at night because the siren was switched on at night and she was in her late stages of pregnancy.

Riziki said sometimes children use the area as a playground which is dangerous during emergencies adding that their girls are also at risk of engaging in sexual behaviors with the firemen who stay there in shifts.

Joseph Mugambi a boda-boda operator who works in front of the fire station said the siren is affecting people at night.

He said the road leading to the station is not an emergency one and during an emergency, it gives the firemen a difficult time to respond.

“Sometimes we are forced to stop people and motorists whenever the fire engine is responding to an emergency to avoid an accident as there are no bumps,’’ he said.