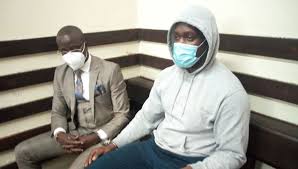 Chris Obure, a businessman alongside co –suspect and his aid his aide Robert Ouko were set to be charged of murder
However, Obure’s counsel filed an application seeking to have the charge sheet reviewed to exclude him from murder charges and instead list him as a State witness.

Extracts of the charge sheet as seen from our news desk read, “It is therefore unreasonable in the circumstances to charge the applicant for the offence of murder while the facts demonstrate that he would better serve the interest of justice as a witness to the facts leading to the untimely and sudden death of the deceased,” the application reads.

“The CCTV footage shows Bodo breaking into my office and retrieving my firearm from its safe. Moreover, the CCTV captures him breaking in again and returning the gun that was allegedly used in the murder of Omwenga,” the application reads. Justice Mumbi Ngugi admitted to the request for a deferral to allow another court to hear and determine Obure’s application.

Obure’s lawyers Danstan Omari and Tom Awit tried to to convince the court that Ouko stole his boss’ gun, which was identified as the murder weapon, and was therefore not duly authorized to possess the weapon.

Obure’s move to be exonerated from facing the murder charge relies on surveillance footage showing the co-suspect, his aide Robert Ouko, both at the crime scene and fetching the murder weapon from his office.

The application further states that it is no doubt that the deceased was shot by Robert Bodo and that the firearm that caused the death of the deceased is registered under the name of Obure but he had nothing to do with the killing of Omwenga.
Obure is a licensed firearm holder while Bodo is not.