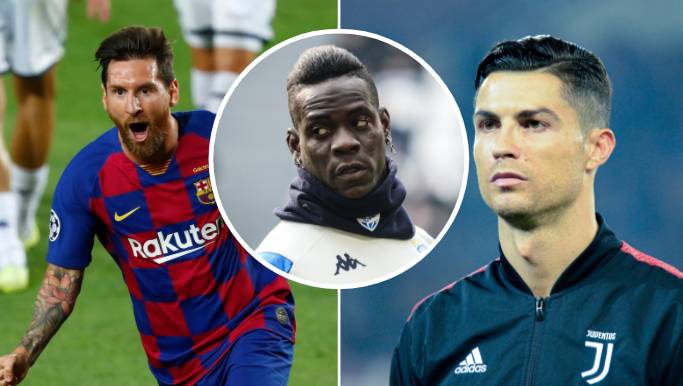 “For the good of football, please don’t compare him [Messi] to Juve’s Number 7 [Ronaldo] again,” he wrote.

Balotelli came forward with an explanation for his comments, while offering his two cents on the longstanding debate surrounding the Ballon d’Or winners.

“If we’re talking statistically, they’re the same,” he explained per Football Italia.

“But as someone who played against both, I can say that, in my opinion, Messi is out of this world, embarrassing. You can never get the better of him.

“In terms of quality, Messi is better than everyone. I’m convinced that if you ask a defender if they would rather play against Messi or Ronaldo, they would have no doubts.

“Messi and Ronaldo are two phenomena, true, but they’re not the same. If there was no Messi, Ronaldo would be the best in the world.

“I have a lot of respect for him, for how he trains, and it’s pleasure to watch him play and see how he managed to work on his body.

“Then people take it out on me and say I don’t know what I’m talking about… We’re talking about the two best players in the world.

“Yesterday, Messi decided the match against Liverpool. I leave the statistics to journalists, but it’s like comparing [Diego] Maradona and Pelé.

“Pele scored more goals than Maradona, but when Maradona touched the ball, he was something else.”

Balotelli, meanwhile, looks to be on the move this summer after a huge fallout with current club Brescia.

He has two years remaining on his deal with the Serie B side but a huge fallout with owner Massimo Cellino could already spell the end.

The club outed him as being around a stone overweight last month by changing his weight on the official website to 99.8kg, roughly 8kg more than he should be weighing.