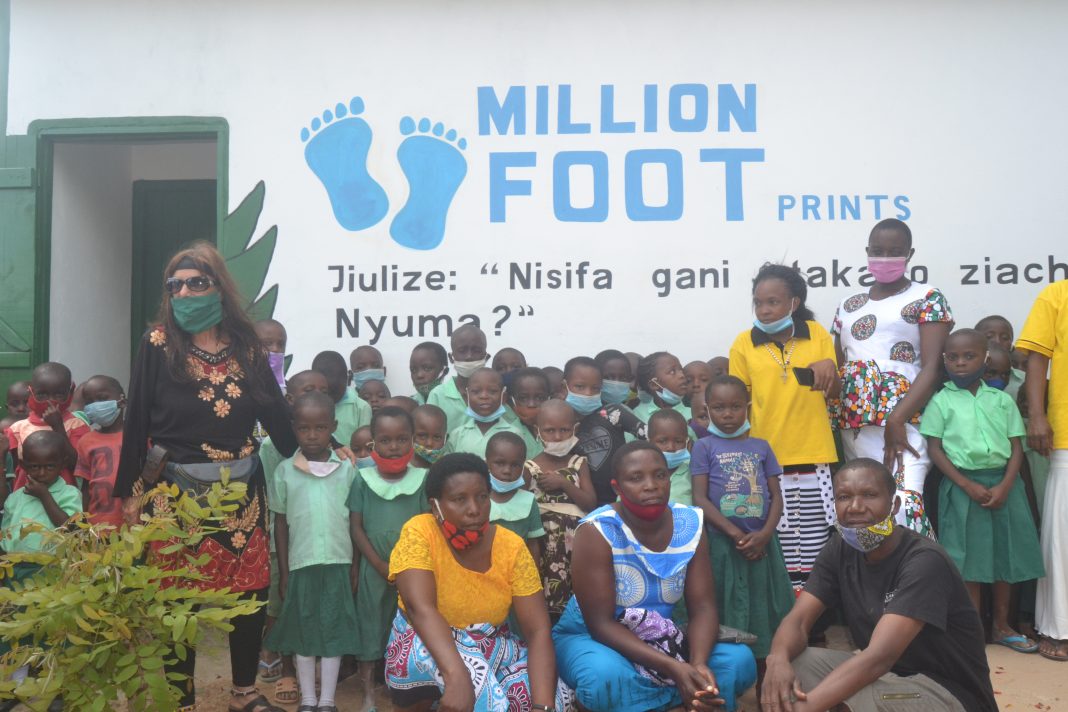 The quest for education for 62 vulnerable children from Mere in Malindi Sub has been addressed. This is after a foreign donor, One Million Footprints from the US agreed to support in paying school fees for their education. – By Ramadhan Kambi.

Each month, the organization through a 75-year-old German conservationist Silvia Pirelli who lives in Mere pays Sh116, 000 towards the children’s education.

The US-based foundation has also built a Sh500, 000 toilet at their school, which did not have this basic sanitation facility

That has also addressed sanitation solution to the children from Kwaupanga ECDE center who only had two toilets for use.

There were celebrations as parents and community members joined the children during the official launch of the toilet project at the village.

Mr Pirelli said the five-door toilet has two doors each for the boys and girls and one door for the community around who will be able to use it for a small fee.

Speaking during the launch the excited Pirelli said his relative who stays in California with his group One-million-foot prints established the foundation to support the children by paying their fees and painting the school.

“The toilet of the school is very important in this area for hygiene purposes because of sickness, so I came up with the idea to make a toilet and this is what I have done.

She said because the community around have no toilet, they set aside one door for them to be able to use.

She said that she first started supporting the school which was initiated by Kwaupanga Baptist church after she established that there were a lot of jiggers. That prompted her to cement the classrooms.

“Basically, the problem of the area is hygiene, poverty here is very high people from the area don’t have money to send the children to school so with a little bit of support, I said we could do it,” she said.

The donor now plans to plans to build a dining hall for the children so as to enable them to eat lunch at school as there are many cases of burns because the children normally cook for themselves lunch at home.

The head teacher of Kwaupanga Baptist ECDE Priscah Mapenzi said they were happy to receive the project and the sponsorship of the 62 students.

She said as teachers they are motivated because they get their salaries in time as previously there were challenges of payment due to the poverty levels of the families.

“We previously used to depend on the parents whatever little they pay like Sh500 that could be our salary,” she said.

The teachers further added that whenever they chased the children home they would drop out of school because of lack of money.

Ms Delfina Charo who is in charge of the ECDEs in Ganda ward said toilet will help address the problem of sanitation.

Normally she said one toilet is supposed to be used by 10 girls while 20 boys are also supposed to share one but that was not the case at the school.

Vincent Kaka one of the parents they are happy to get sponsors for their children and the donation of the new toilet which shall also be able to be used by the community.

Kaka said many parents are poor and the sponsorship has really relieved them of the burden of educating their children.