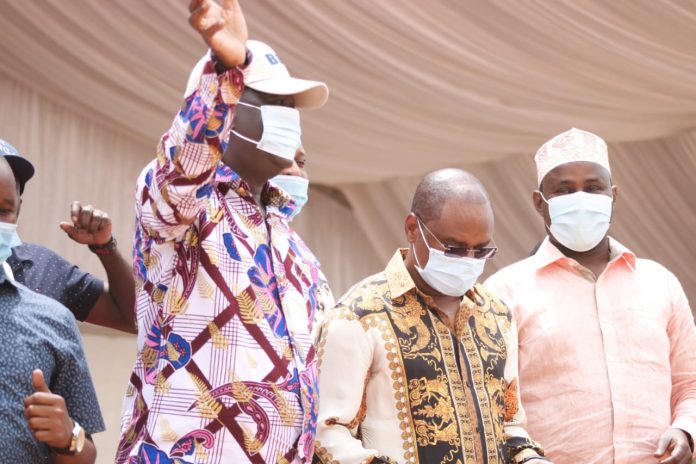 ODM leader Raila Odinga clashed bitterly with his host Kilifi Governor Amason Kingi over the formation of Coast party coalition after the ODM leader saying the Governor was ungrateful. – By Ramadhan Kambi.

The two leaders clashed in Ganze during a BBI rally attended by several MPs, MCAs and the residents at Ganze football ground.

All hell broke lose when Governor Kingi who started by giving Raila a dress-down over his remark that forming a coast political parties coalition was tribal and a national security threat.

“Baba when you announced that you were coming to Coast for the BBI intiative I was very happy. But unfortunately you went out of your way and addressed our coast party issues. I can tell that the BBI agenda was ruined by your statement over our Coast unity, ” the Governor said.

The Governor further said that it was unfortunate that any attempt by our leaders from the Coast to form a coalition is greeted with all manner of discouragement.

“We can’t take this. What we are forming is a coalition of political parties and not a tribal party, ” said Governor Kingi.

But when he rose to speak Mr Odinga lashed at Governor Kingi reminding him that he never talked about those issues while still in office and is speaking about them because he is leaving the office.

Mr Odinga said he held the Governor’s hands while still green in politics, giving home several ministries to run but can now have the guts to plan chatting away from him.

“I held your hands. I gave you fisheries ministry, East Africa ministry. When this was happening, you did not see the need to move out of my hands. Didn’t you see this when I held you high,” said Mr. Odinga.

During his visit to Taita Taveta, the former ODM leader lashed out at the formation of a ‘regional’ political party for coast.

“We want to have national political parties because regional and county parties will only divide the country. It is against the Constitution to form a trial party and I advise the coastal community to remain in national parties,” he added.

His comments echo the sentiments of ODM Deputy chairman and Mombasa Governor Ali Hassan Joho, who is also gunning for the top seat.

Coast leaders allied to the tangatanga faction led by the deputy president William Ruto have distanced themselves from the move, urging Kingi and other like minded politicians should join them.