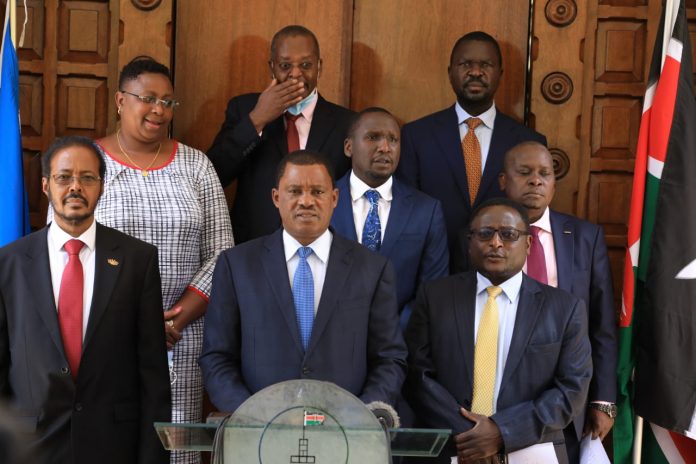 National Assembly speaker Justin Muturi has moved to court to challenge the impending dissolution of parliament.

Speaking at a presser, the speaker, who is also the head of the Parliamentary Service Commission (PSC) says the Chief Justice’s advice to President Uhuru Kenyatta to dissolve Parliament “is ill advised, premature.

“The Commission notes with disappointment that the Rt. Hon. Chief Justice has ignored fundamental issues that go to the root of the fabric and structure of our Constitution in advising the President to dissolve Parliament,” said PSC Chair and National Assembly Speaker Justin Muturi.

Speaker Muturi scorned Maraga for ignoring two high court petitions that were crucial to the parliament.

“In particular, the Honourable Chief Justice glossed over the fact that there are two High Court petitions set for hearing on October 7, 2020 to determine, among other issues, whether the order made by Justice Mativo on March 29, 2017 during the tenure of the 11th Parliament is applicable to the 12th Parliament which was elected in August 2017. It is therefore premature for the Rt. Hon. Chief Justice to take this action while the High Court is yet to determine this matter.” he added.

The letter drew mixed reactions from legal minds, with some supporting Maraga while others like Speaker Muturi shifted the blame to the Judiciary and the Executive for failing to amend clauses of the constitution that may support the bill.