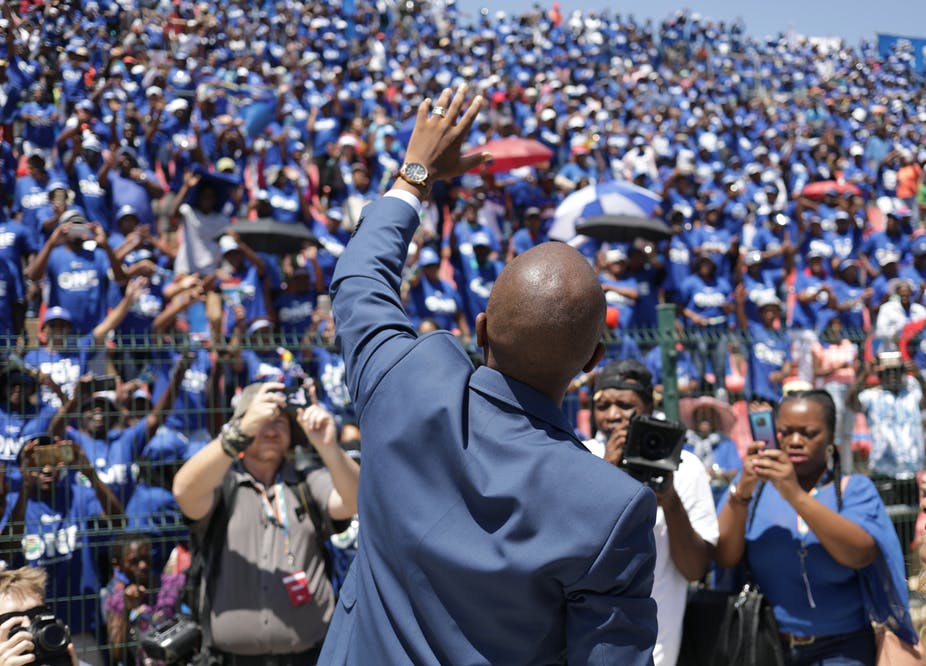 Uzalendo Newshttps://uzalendonews.co.ke/
Do you have a story that you think would interest our readers? Write to us 'info@uzalendonews.co.ke'
Mmusi Maimane, leader of South Africa’s main opposition party, the Democratic Alliance, on the campaign trail. EFE-EPA /Kim Ludbrook Steven Friedman, University of Johannesburg

Democracy is meant to be a system in which political parties compete to convince the people that they have answers to their most pressing problems. South Africa’s election campaign shows that it does not always operate that way.

The national and provincial elections on 8 May, in which the governing African National Congress (ANC) is hoping to end a decline in its support, is loud and hard-fought. But there is little connection between the problems facing South Africans and the issues over which the campaign is being fought.

South Africa’s core problem is a weak economy which is unable to grow at a rate which preserves people’s living standards. This is a consequence of deeply rooted problems, hold-overs of the country’s minority-ruled past which persist despite 25 years of democracy.

One such hold-over is the exclusion of millions of people from the economy’s benefits. Many South Africans don’t earn a wage or salary because the formal job market is closed to them. Neither government policy nor business practice have found ways to ensure that they can earn a living and contribute to the economy even if they have no formal job. This reduces both the talents available in the mainstream economy and the markets into which businesses can sell their products.

Another is the survival of the racial patterns of the past, albeit in new forms. This ensures a lack of trust between (largely black) government and (largely white) business which makes cooperation to address economic problems difficult.

Although a growing black middle-class has emerged, its members are probably the angriest people in the country because they believe their abilities and qualifications are not recognised by the white business people and professionals who, in their view, remain in charge.

Besides damaging the economy, this ensures middle-class support for demands such as land expropriation without compensation. The ensuing disputes damage confidence and make growth much less likely.

About symptoms, not causes

If life worked in the ways in which textbooks say it does, these issues would be at the centre of the election campaign. We would expect parties to be competing to show that they have the best solutions to slow growth, the exclusion of millions from the economy, and racial tension.

They are doing no such thing. To the extent that the campaign is about anything other than name-calling, it is about symptoms, not causes.

If there is a key campaign issue, it is corruption. The ANC is trying to convince voters that its new leadership is committed to rooting out misuses of public funds and trust while the opposition insists that it has not mended its ways.

Corruption is obviously a huge problem. But there are two problems with the way it is being treated in the campaign. First, the parties are not trying to sell voters concrete plans to root out corruption. Rather, the campaign assumes that corruption will disappear miraculously if some politicians are replaced by others.

The governing party says its leadership will do the trick; the opposition, that only their leaders will. But the problem did not end when the ANC leadership changed and it persists in cities which the opposition won in 2016. It is deep-rooted whoever governs and will continue until concrete plans to tackle it are implemented. None of the parties have any plans.

Second, corruption is a symptom of the economic problem. If ambitious people cannot get into the middle-class because the doors to the formal economy’s benefits are closed to them, they will use politics to move upwards, and won’t necessarily play fair because the stakes are so high.

If poor people cannot get a wage or salary they will, if they can, attach themselves to politicians and support whoever gives them what they need to get on. If the imagination of the political class does not stretch further than claiming repeatedly that they are clean, their claims to good faith will be undermined by continued sleaze below the surface.

A more sinister feature of the campaign is that parties are competing to show that they are tough on immigration.

This makes economic problems harder to solve – the country has a skills shortage and keeping out people with abilities and qualifications has to harm the economy: the Minister of Finance, Tito Mboweni, said as much in his February budget speech.

Again this is a response to symptoms, not causes: while hostility to foreigners is a world-wide trend, it takes on its most virulent form when economies cannot meet people’s needs.

The racial issue is, in effect, ignored – except where politicians or parties see mileage in keeping alive the racial stereotypes which cause the problem in the first place. How to encourage South Africans to talk seriously, let alone bargain, across the divide is a non-issue for all the parties.

For the rest, the campaign is about platitudes. All the parties are in favour of creating millions of jobs but no-one knows how. And no-one addresses the reality that the jobs which they claim they will create were extinguished years ago and the crisis will persist until they start talking about how to include in the economy the hundreds of thousands who won’t have formal jobs.

They all support better government services and they all believe their leaders are better than anyone else’s. None of them seem able to move out of their rut to recognise what is ailing the country, let alone to suggest ways of solving problems.

The textbook view would suggest that this means the country is incapable of addressing its problems. It does not. It simply means that party politics cannot do this. Progress will depend on whether the key interests in the economy and the society are capable of making deals which will address the problems. Whether or not this happens does not depend on what parties say on the hustings.

But the election is important. It will decide whether politicians are elected who are open to that deal-making. But, as long as the real issues are absent from the campaign, citizens will be given no say in how these issues are tackled. In a democracy, discussions on how to solve problems should happen in public and parties should implement solutions which voters have chosen. South Africa is still far away from that possibility.